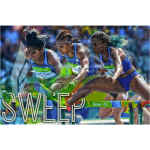 USA Track & Field’s (USATF) social media objectives during the ten days of 2016 Olympic Games’ athletics events (August 12 –21) were to increase followers and engagement on Twitter, Instagram & Facebook through both organic and paid posts.

Most successfully, USATF developed and implemented a strategic Facebook (@USATFfans) campaign to boost metrics and expand the organization’s relevance and reach, capitalizing on the positive momentum surrounding Team USA.

In terms of campaign execution, the team utilized unique-to-Facebook capabilities such as Facebook Live (via NBC Olympics) and 360-degrees views. All potential medalists were identified and graphics were created for each medal position (over 100 graphics in total).

Graphics were posted to social media within seconds of crossing the finish, utilizing the slight TV delay to announce medalists in real time. The potential for a podium sweep in the women’s hurdles was acknowledged early in the Games and allowed for both medal graphics and sweep graphics to be created and scheduled a week in advance.

The team also gathered athlete quotes onsite in Rio to incorporate into posts on social media and USATF.org. The team averaged six posts per day to create a consistent flow of timely information and maintain USATF’s reputation as the official place for Team USA Track & Field.