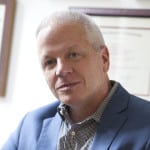 PR News recently asked its community to tell us who should be listed among the top game-changers of PR in the last few years. Here, we look at game-changer Steve Cody. Check out the complete list of the 50 Game-Changers of PR for 2017.

Steve Cody has brought humor to a profession that takes itself way too seriously.

Cody is co-founder and co-CEO of Peppercom, based in New York with offices in San Francisco and London. Since 2006, Cody has been bringing comedy to the public relations field in unexpected ways. He's proven that training in comedy can offer tremendous benefits, and has instituted internal and external stand-up and improvisational comedy training for employees and clients alike.

But it’s not just about getting a laugh here and there. The comedy training program has helped the firm’s major clients polish presentation skills, build rapport and improve culture. The lessons learned from the employee comedy program—storytelling, authenticity, reading an audience and team building, to name a few—can enrich a company’s culture and has changed how countless professionals approach PR.

Peppercomm has also staged stand-up comedy charity events for organizations such as the ASPCA and the Leukemia & Lymphoma Society that raised tens of thousands of dollars.

Cody is a devout believer that workplace culture is a key ingredient to agency success, which helps Peppercomm enjoy high retention rates. The impact of Cody’s work has garnered widespread industry recognition, including a segment on MSNBC and an article in The Wall Street Journal.

Cody has also been a columnist for Inc.com for many years, and publishes a daily blog called RepMan, for which he was named PR News’ Blogger of the Year in 2011.

Most Interesting Fact Not Found on Steve’s Resume

“I've been ice, rock and mountain climbing for the past decade and have summited some of the world's highest (and most famous) peaks. I also perform stand-up comedy to supplement my income.”

Steve’s Advice to His 20-Year-Old Self

“Realize that success is predicated upon the lessons learned from failing. Also, be prepared for the decades to pass by in the blink of an eye.”

Steve’s Profession in an Alternate Universe

“Major League Baseball. The Mets are in desperate need of middle relief help and I can still dominate any Wiffle Ball game in which I play.”

“I'm all about dogs, and named my firm in honor of my late black lab, Pepper. I've also leveraged my love of comedy to raise tens of thousands of dollars for a whole host of charitable organizations.”