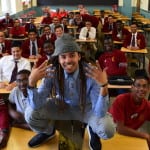 Dee-1, though an unlikely bedfellow for PwC, was the perfect candidate to help bring PwC's Earn Your Future (EYF) curriculum to minority students around the country.

EYF is a five-year, $190 million commitment by PwC to teach 2.5 million students and educators how to take control of their finances and ensure they are financially literate and empowered.

In March 2016, the music video for “Sallie Mae Back” by Dee-1 had gone viral. PwC learned that Dee-1 was, in fact, a former middle school math teacher who had left the classroom to pursue a music career after he signed a record deal; he finished paying back his student loans in 2009. Dee-1 remained passionate about teaching financial concepts to young people—"Sallie Mae Back" was inspired by the excitement he felt when he made that final payment on his loan.

Dee-1 responded to PwC’s request to work together enthusiastically. They kicked off a two-week collaboration in which Dee-1 visited four high schools with PwC to teach seniors curriculum that centers on planning and preparing to go to college and paying for it—a combination of EYF and PwC’s Student Loan Paydown program (in 2015 the firm announced it would pay up $1,200 a year toward employees’ student loans).

The campaign also leveraged a cross-section of PwC’s and Dee-1’s social media channels to drive messaging to potential employees, media and the marketplace at large. Key channels included Snapchat, Instagram, Twitter and Facebook.