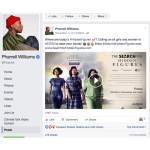 PepsiCo and 21st Century Fox, in partnership with the New York Academy of Sciences (NYAS), launched "The Search for Hidden Figures," a new scholarship contest designed to help uncover the next generation of female leaders in science, technology, engineering and math (STEM).

The film tells the 'untold' story of three African American female NASA mathematicians during the Space Race of the 1960s. This contest is supporting today's emerging STEM visionaries by awarding over $200,000 in scholarships and other prizes to over 50 winners.

Online entries were accepted directly at www.SearchforHiddenFigures.com beginning in November. Semifinalists were selected in mid-December, and each was asked to provide a video submission for continued consideration.

On January 12, 2017, two grand prize winners were announced. Winners receive access to the NYAS STEM skills training materials and programs, up to $200,000 in scholarships, and a trip to the Kennedy Space Center in Orlando.

To help encourage participation, PepsiCo and 21st Century Fox supported the campaign with a national TV and digital and social media campaign featuring the film's lead actress, Taraji P. Henson, as well as messages of encouragement from the film's actresses and exclusive behind-the-scenes footage from "Hidden Figures" on the contest's website. To further discussion around STEM, PepsiCo also launched a collection of STEM mobile and web games, quizzes and challenges for students and fans of the film to test their skills.

Just one month after it had launched, the contest already had over 7,500 entries, 99 million digital impressions and 9 million digital engagements across paid, owned and shared digital media.