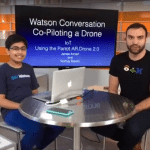 IBM's Facebook page currently garners the highest engagement rates among B2B tech brands. So, in 2016, IBM identified Facebook Live as a major opportunity to bring the brand to audiences in a new, fresh way.

IBM chose its topics carefully for Facebook Live in order to differentiate from traditional video. As IBM saw particular Facebook Live segments take off organically, the company has worked with its media team to boost with paid dollars. To execute these videos, IBM’s in-house team conceptualized, planned and executed the shoots.

In 2016, IBM executed eight Facebook Live videos. Its most successful video was with 13-year-old developer Tanmay Bakshi, who demonstrated how to use IBM Watson technology to co-pilot a drone. IBM also took its audience behind the scenes at the U.S. Open Tennis Championships, for which IBM is the official technology partner, powering scoring data and the USOpen.org website. Other videos showcased the designers of fashion house Marchesa, who worked with IBM to design a dress for the Met Gala, as well as IBM researchers demoing new innovations in real time.