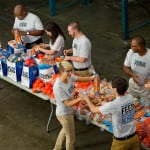 North Carolina-based grocery store company Food Lion launched Food Lion Feeds in 2014 with a simple, essential message: "We believe no one should have to choose between dinner and rent." The company displays a passion for helping to solve hunger right now, while investing in and honoring those who work toward ending hunger in the future. To mark the launch of the Food Lion Feeds campaign, Food Lion pledged to donate 500 million meals to families in need by the end of 2020.