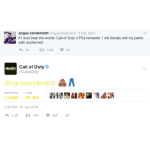 Edelman’s objective was simply to stoke this celebration on social as Activision wanted the focus of the reveal time period to remain on their marquee title, Infinite Warfare.

In December 2014, a full 17 months prior to the 2016 title reveal period, a Call of Duty fan with a modest following tweeted, "If I ever hear the words 'Call of Duty 4 PS4 remaster' I will literally [sh@!] my pants with excitement."

It should be noted that the Call of Duty official Twitter had never responded to a fan on a one on one basis and its passionately invested fans knew this. So when Call of Duty responded to this old random tweet with just the "poop" emoji and the "pants" emoji, many followers received push notifications of the activity and that implied confirmation of Modern Warfare Remastered in 2016 took off like wildfire.

The tweet received over 14,000 retweets in 24 hours and was liked by over 21,000 fans, making it the most engaged-with piece of content on Call of Duty's owned channels in all of 2016. It also fueled earned media pickup from major gaming press like Kotaku, IGN and Polygon. Conversation related to the confirmed release on social was an exceptionally high 65.7% positive, compared to a franchise-wide average of 12.9%.