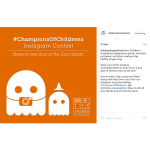 DEVENEY wanted to garner local and regional support to showcase how Children’s Hospital New Orleans (CHNOLA) has helped kids do what they do best: be kids. The team ultimately decided to display CHNOLA’s unparalleled ability to treat New Orleans’s children.

The overall tactic was to activate the millennial mom (or dad) to share positive, emotive stories about Children’s Hospital New Orleans by posting a picture to Instagram of their child doing something they couldn’t have done before without the help of the hospital’s staff, using the campaign hashtag #ChampionsofChildrens.

To create more buzz and engagement, the team decided to make a #ChampionsOfChildrens Instagram contest. A low-budget contest that would also motivate parents to post pictures of their kids on Instagram was needed. After analyzing CHNOLA’s past and existing partnerships, they landed on Audubon Zoo. The hospital had a strong relationship with the zoo, which was the perfect way to connect with the target audience.

Instead of giving away a pass to any day in the park, the team wanted to give away more valuable tickets. With Boo at the Zoo, a popular charity event tailored specifically to families with small children, coming up in a few weeks, the perfect giveaway was found. The team decided to give away a four pack of Boo at the Zoo tickets to a randomly selected #ChampionsOfChildrens participant.

To get the word out about the contest, DEVENEY created a visual for Children’s Hospital New Orleans and their parent hospital, LCMC, to distribute on their social channels. In the copy of each post, the step-by-step process to participate was included. Additionally, an email was drafted for CHNOLA to deploy to their database.

The campaign was ultimately a success, as it increased Children’s Hospital New Orleans’ Instagram following by 35%, giving the brand an even broader reach.