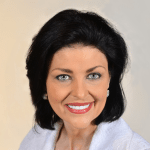 Catherine Hernandez-Blades is the senior vice president of corporate communications at Aflac. She is a pioneer, a hard worker, and has dedicated her life to influencing companies to give back. Throughout her career she has focused on increasing connections between organizations and their publics and stakeholders. Her focus is on corporate social responsibility. She believes deeply in the causation between CSR and the success of businesses, and developed a survey, calculating the direct impact of CSR on business successes for Aflac. Her survey found that 83 percent of investors are more likely to invest in companies with positive corporate reputations.

Hernandez-Blades is the only corporate communications executive to be on CNBC’s Squawk Box in 2016, where she gave a 6-minute interview about the importance of CSR. She has been a pivotal figure in the shifting image of PR. She developed a full-blown CSR program for Aflac which has resulted in a significant 3.4 point increase in Aflac’s Reputation Institute pulse score—results which perfectly exemplifies her deep understanding of the intricacies of CSR.

The program she developed for Aflac utilizes modeling, technology, and concrete data in order to drive messaging about their CSR plans which provides the company with significant return on reputation (ROR). She has developed research initiatives dedicated to CSR, including the survey mentioned above, which she developed and which was distributed to more than 6,000 consumers and investors. She developed the survey to generate real, compelling stories from respondents about the effects of companies’ changes in their approaches to CSR.

Hernandez-Blades is determined and has always set her sights high. She inspires her co-workers to work just as hard as she does and has dedicated her life’s work to raising awareness about businesses' charitable initiatives and ethical causes. She has completely changed the course of the PR industry, placed an important emphasis on measurement and quantifiable results, and her work has resulted in countless charitable initiatives.

Most Interesting Fact Not Found on Catherine's Resume

I’m from New Orleans and am a Saints football fanatic, typically undergoing a massive personality change on game days!  Additionally, the personality the day after a game is very much dependent upon whether or not the Saints won. Also, as a child, I wanted to be a backup singer for Elvis. When that didn’t work out, I went into PR.

Catherine's Advice to Her 20-Year-Old Self

Don’t be so intense.  At 20, I was producing a morning television news program, working from 3-9 every day, taking 21 hours a semester, and volunteering as an officer in a number of student organizations. The lesson is that yes, you can do it all, and no, you should not try to do it all at the same time. Unfortunately, it does not appear that I have actually learned that lesson, yet.

Catherine's Profession in an Alternate Universe

I love corporate strategy and the sound of the ocean, so anything that would combine the two would be of great interest.  Maybe a highly strategic beach resident. . .