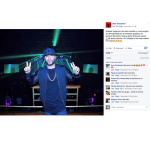 As an official sponsor of the 17th Annual Latin GRAMMY Awards in 2016, McDonald’s was in a unique position to leverage Hispanics’ passion for music to build excitement for the All Day Breakfast More Choices Menu.

The menu, which had launched nationwide just weeks before the awards show, sought to give consumers more of the breakfast choices they love at any time of day.

For the Latin GRAMMYs, McDonald’s, working with BodenPR, employed this same approach—giving consumers more of what they love. The brand’s Más All Day Breakfast, Más Acceso social media campaign sought to give U.S. Hispanic consumers not only more of the breakfast they love, but also more music and more exclusive access to their favorite artists.

The social media campaign Más All Day Breakfast, Más Acceso utilized Facebook’s interactive and immersive storytelling ad units to connect with Hispanic consumers—over 31 million on the platform alone. The campaign came to life through a combination of multimedia content—from Live to video to still images.

The Facebook Live stream with Jesse & Joy, for example, allowed consumers to ask their questions and directly become part of the conversation in real time. The broadcast was moderated by Maity Interiano, Univision’s Despierta América entertainment reporter, and included a series of questions, a fun game and All Day Breakfast goodies for viewers.
Notably, this Facebook Live was the brand’s first in Spanish, as well as the first long-format live video receiving paid support. Three short-form videos featuring the Jesse & Joy duo focused on topics and questions that aligned with campaign messaging—“more of what you love”—and sought to give consumers more access to the artists. These were shared via the brand’s and the artists’ Facebook & Twitter platforms.