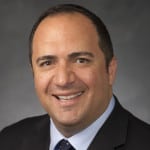 Aaron Sherinian became a catalyst for great change over the last year, using his diplomatic abilities to manage an award-winning in-house communications team as well as orchestrating a number of global communication campaigns grounded in digital and social engagement.

In the fall of 2015, Sherinian spearheaded the foundation’s highly organized push for a legally binding and universal agreement on climate at the Paris Climate Conference (COP21). This included launching several global initiatives (including Earth To Paris) and leading the United Nations Foundation’s Communications Corps to keep those initiatives aligned and in service of one another.

For Earth To Paris, Sherinian assembled a coalition of global partners that drove awareness about the connection between people and the planet during COP21. The movement culminated with a global digital surge, locally hosted watch parties and events in at least 19 countries across six continents. A major global trend on Twitter, #EarthToParis hit nearly 1 billion impressions.

To support and amplify the Sustainable Development Goals developed at COP21, Sherinian led events like the Social Good Summit, attended by thousands in September 2016. There, he marked the goals’ one-year anniversary and encouraged participants to consider what they want the world to be like in 2030. #2030NOW was his rallying cry, and it was resounding: The hashtag made 1.8 billion impressions during the two-day summit.

Sherinian’s colleague Zain Habboo says this: “To work for, and with, Aaron means wanting to be a better version of myself every day. He has created a team of the strongest global communicators in the business and turned these young professionals into an innovative and substantive group that is coveted internationally.”