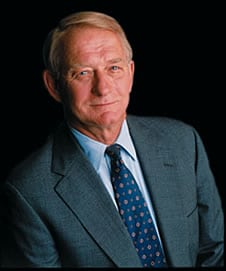 As President Jimmy Carter's press secretary in the 1970s, Jody Powell's communications skills were forged in the crossfire of warring political parties and unrelenting media scrutiny. As the New York Times wrote in Powell's 2009 obituary, he subsequently put those communications skills in an "improbable" partnership with former press aide to Nancy Reagan, Sheila Tate. Together, they build the powerful Washington, D.C.-based public relations agency, Powell Tate. Today, five years after Powell's death and almost three years since Tate’s retirement, Powell Tate continues to thrive on the strong foundation they built, and has been recognized by PR News, Washington Business Journal and The Washington Post as a best place to work.

Jody Powell defined, and redefined, the role and style of presidential press secretary. He was a close, trusted, adviser to the president, who understood the interplay between policy and communications. He had a special gift with the press and a love-hate relationship with the White House press corps. He brought humor, warmth, and humanity to the podium—along with an occasional insult when warranted. Over the years, future press secretaries of both parties sought him out for advice and counsel, and he became friends with many of those who came after him.

Powell Tate remains successful and distinct because of the founders' leadership and vision. Always approachable and ready to roll up their sleeves, they established the agency's tradition of working across practice groups and levels, with interns and executive vice presidents to deliver the best possible service to their clients.