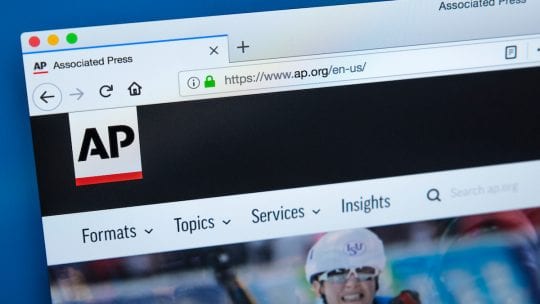 The Associated Press has long upheld a reputation for fair, unbiased reporting. Known as one of the first outlets to break trustworthy news, it remains an institution for quality journalism.

Lately, however, the AP finds itself the lead story, after firing a 22-year-old news associate, Emily Wilder, three weeks into her job. In a statement, Wilder claimed the AP released her with “little to no explanation” on the grounds of violating the company’s social media policy.

My statement on my termination from The Associated Press. pic.twitter.com/kf4NCkDJXx

Wilder, a previous activist for Palestinian human rights at her alma mater, Stanford University, said she faced a public smear campaign from the Stanford College Republicans group. In addition, Wilder says  she provided transparent information to AP editors regarding her activities. Wilder retweeted several pro-Palestine posts since joining the AP.

The AP “prohibits employees from openly expressing their opinions on political matters and other public issues for fear that could damage the news organization’s reputation for objectivity and jeopardize its many reporters around the world,” according to the article.

“We have this policy so the comments of one person cannot create dangerous conditions for our journalists covering the story,” Easton said. “Every AP journalist is responsible for safeguarding our ability to report on this conflict, or any other, with fairness and credibility, and cannot take sides in public forums.”

The AP now seems to have a dual struggle—internal communication and industry reputation—on its hands. A lack of transparency on Wilder led 100 AP staffers to release an open letter expressing disapproval about how the situation was handled and the company's unclear social media policy. The issue has become not that Wilder violated the policy, but that it hasn’t been shared how, which leaves employees in the dark and disintegrates trust.

“While firings are rarely transparent, AP chose to name Wilder publicly. The lack of communication since then about Wilder’s firing and the circumstances surrounding it gives us no confidence that any one of us couldn’t be next, sacrificed without explanation.”

Mara Butts, board chair at SocialMedia.org and social media manager at Hexagon Geosystems, believes the nature of a social media policy may cause unease amongst employees regarding their confidence in a fair review of their posts or activity.

“Social media policies are often vague because the landscape of social media is constantly changing,” Butts says. “Organizations intentionally write these policies to give leaders some room for discretion for unforeseen situations.”

Butts also says the AP may need to take proactive steps to cool things off with staff, as well as including them in future policy processes.

“The best approach would be to agree to a transparent communications protocol with the entire staff when decisions like this are made,” she says. “Another good faith gesture may be extending the timeline around controversial decisions by suspending employees first to allow time for an investigation/review before termination.”

Some organizations may need to update training, particularly as new platforms emerge and younger generations are hired. For someone born into a world where a majority of their conversations unfold on social media, expressing opinions online may feel as normal as breathing. Butts advises incorporating a more detailed training for all sides—employee and HR, similar to diffusing crisis scenarios for PR pros.

“Consider developing a simple training module with real-world examples to help the employee better understand how the organization’s policies may affect their personal social media presence or potentially create reputational risks for the organization,” Butts says.

“Social media leaders and the organization’s HR team should work collaboratively to develop the policy and discuss how to respond to a scenario when a policy violation has occurred before an actual incident happens.”