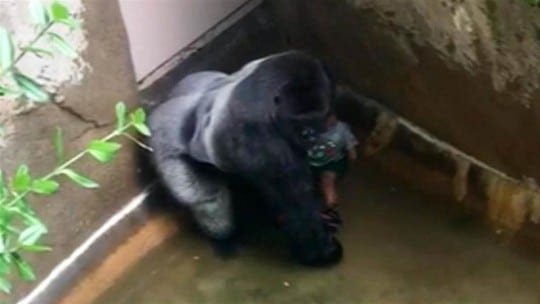 Personnel at the Cincinnati Zoo & Botanical Garden killed a rare gorilla to protect a 4-year-old boy who fell into the Gorilla World exhibit May 28, according to Cincinnati.com.

Once inside, members of the Cincinnati Fire Department (CFD) witnessed the boy being dragged and thrown by a 17-year-old, 450-pound male western lowland gorilla, according to a press release issued by the CFD.

After 10 to 15 minutes observing Harambe—one of three gorillas in the exhibit at the time and the one that grabbed and dragged the boy around—a Cincinnati Zoo employee killed the gorilla with one shot from a long rifle fired while the boy was between the animal’s legs, the CFD’s press release went on to say.

After the incident, the boy was taken to Cincinnati Children’s Hospital Medical Center for serious, but non-life-threatening injuries, reported Cincinnati.com.

The event was captured on video by individuals attending the exhibit. Footage of the boy being handled by the gorilla, accompanied by news of its subsequent killing, quickly went viral.

For the Cincinnati Zoo, the horrible accident swiftly escalated into a full-blown crisis as animal rights activists and social media users were quick to criticize the zoo’s decision to take the life of the critically endangered animal.

However, the zoo was quick to respond with a statement posted to Facebook that explained the rationale behind taking the animal’s life to save the young boy’s.

“We are heartbroken about losing Harambe, but a child’s life was in danger and a quick decision had to be made by our Dangerous Animal Response Team,” said Cincinnati Zoo director Thane Maynard in the Facebook post.

By recognizing the tragedy of losing a member of a highly endangered species, but also standing by the quick thinking that ultimately saved a young life, Maynard doesn’t try to ignore either side of the incident, and instead puts everything on the table. In the post, the zoo goes on to address concerns about the barrier surrounding the enclosure, the decision to forgo tranquilizers and the rarity of such an occurrence.

Continuing this thread of transparency, the Facebook posts detail the steps taken by first responders before the decision was made to end the gorilla’s life. In the zoo’s communications, it is made clear that this was not an easy, let alone rash, decision.

Two days after the incident, on May 30, Maynard held a press conference to further defend the zoo’s actions, according to People.

This is the kind of crisis that’s not going to be resolved by a simple admission of its existence. In situations like this, transparency is the key to mitigating the backlash that naturally follows a situation of this magnitude, and that’s exactly what the Cincinnati Zoo & Botanical Garden is doing. The zoo continues to make it clear that it feels the loss of such a majestic and endangered creature more than anyone, but at the same time the organization continues to stand by its decisions in the face of harsh criticism and fervent anger.