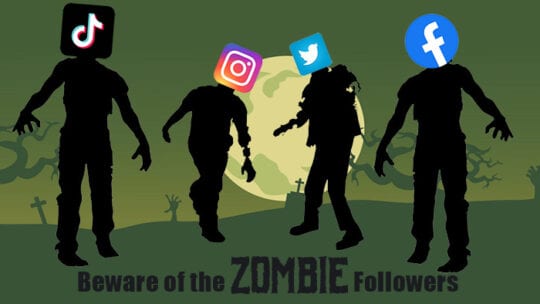 The paranormal, ghosts and other ghoulish characters are not just for Halloween anymore. There are several such things in PR and marketing. For instance, a ghost account may refer to an email address a former employee left behind. It also could be an online account deemed inactive that customers created.

Ghosts also appear in social media as old, abandoned accounts. Ghosts are passive, though they can be a nuisance to data-diving analysts hoping for genuine open-rates and click-through rates. They’re rather benign and quickly remedied.

However, in the realm of social media communication, there’s a far more menacing account that PR pros should be aware of. This account can influence campaigns and even engage with followers. These zombie accounts continue to create haunting headlines.

Some zombie accounts are born from an instant rush to gain mass followers, subscribers and fans. Wannabe influencers and not-so-ethical PR reps are prime targets for companies like FeedPixel, SocialFried and FollwersUp, which advertise "instant followers” and “accounts that look as real as possible.” [Editor's Note: We did not link to these sites due to malware concerns].

Usually, a group who log in and out of shell accounts sell these sites. While some fake profiles engage with your account initially, they can disappear overnight without a trace once the check clears.

They may also sell your followers to a client and from there they spread, making friend requests from account to account. Or worse, they stay, wander and use your followers to push fake news and other content. A much bigger paying client coordinating inauthentic behavior sponsors these activities.

“One of the things that we really like about this company is that they won’t sell your followers that have nothing to do with your TikTok account. They are targeted, and they are real, and they will interact with your content on a daily basis.” ~ FeedPixel

Zombie, or fake, accounts also may be singularly programmed with AI to like, share and even comment, depending on their design. However, Manipulation Service Providers (MSP) routinely sell these accounts, often termed bots, to perform basic tasks on social media.

These zombies also make headlines related to election tampering, polarizing social agenda setting, and premeditated fake news. Most recently, in September, Facebook came under fire for how closely it should monitor for zombie accounts after an FBI tip led to the removal of fake accounts, groups and Instagram profiles run by a...wait for it...US-based PR firm.

To frame up the zombie problem, in Nov 2019 the NATO Strategic Communication Center of Excellence tested the ability of Facebook, Instagram, Twitter and Youtube to identify and remove this kind of manipulation on their platforms. The group proceeded to create zombie accounts by purchasing comments, views, and likes. For about 300 EUR ($353.00) they were able to purchase 3,530 comments, 25,750 likes, 20,000 views, and 5,100 followers. In its followup report, the test of social platforms' anti-bot protocols determined that four weeks after purchase, 4 in 5 of the zombie accounts were still online.

The problem of zombies is so pervasive, especially on social media, that platforms are working constantly on ways of authenticating accounts. Instagram made headlines in August when it announced it would require ID to validate users suspected of inauthentic activity.

While the problem of fake accounts isn’t specific to PR, consider the implications fake accounts have in everyday communication. For example, if you manage a social media account for a large client and you’re not zombie-aware, how many followers are you mislabeling or setting engagement goals against?

Much like a zombie invasion, don’t expect to make true friends, as these accounts turn cold once they’re finally remedied by the platforms and vanish overnight. On the other hand, be wary of the ghost account turned zombie, as an old, abandoned account gets hacked and repurposed, spreading inauthentic content. Another problem stems from programming bots to quickly change the sentiment of your comments as a fake user post:

“Are you looking to make BIG $$$ WOrking from HOME? @Fakeaccountexample - SO easy! Huhu <3”

“Thanks for the like, we have FREE GIFTS at @fakeaccountexample and all of your Insta followers should check it out.”

Every so often it's advisable to run an anti-zombie campaign by looking for zombie accounts in your profiles.

Joshua J. Smith is an assistant professor of mass communications and PR at the Richard T. Robertson School of Media and Culture at Virginia Commonwealth University