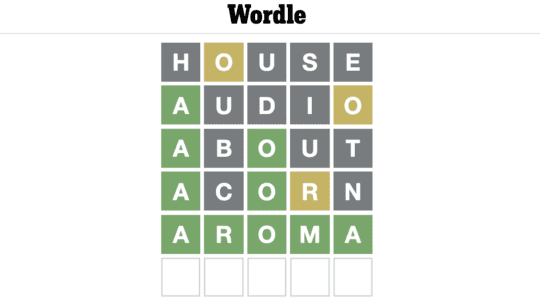 Society can be protective of things it loves. For example—cola. Remember Crystal Pepsi? No one asked for that change. That failed launch remains a hot topic in business schools and amongst an unforgiving public. Or when snack food SunChips tried to become an early adopter of better environmental practices with an eco-friendly bag. Apparently the bag's material was too loud, resulting in its quick retirement.

At present, the internet’s affection for verbal guessing game Wordle knows no bounds. With a simple platform and rules, Wordle provides a daily mini-triumph and sense of productivity during a time when many feel lost, burnt out and rudderless. This simple joy creates a community through the sharing of those little green blocks across the social media universe.

So when The New York Times announced its acquisition of Wordle, it was only fair that fans bristled and voiced concern about losing their new favorite pastime. Would it still be free? Would the game change?

While it may seem like a small item in a world of major issues, for fans Wordle provided a small, yet badly needed break in an otherwise ordinary day.

Wordle officially launched as part of the NYT on February 10. While the transition was seamless for some, others are upset with everything from saved scoring streaks and stats to multiple answers found in the same household. (Until now, Wordle provided a single answer per day for its entire community).

It seems as though the chickens have come home to roost. The NYT fielded a flurry of complaints online after ABC reporter Michael Slezak received notice that the newspaper was removing obscure and offensive words from Wordle, causing discrepancies in answers.

Just got this explanation from the NYT… pic.twitter.com/0gqHh23Eyi

While some may look at this as a bug in the system of a simple game, the Wordle acquisition allows us to consider communication lessons for mergers and acquisitions (M&A) generally.

Prof. Lawrence Parnell, program director of strategic PR at George Washington University, has seen his share of botched M&As. Perhaps three of 10 mergers succeed as advertised, per The Harvard Business Review, Parnell says. Companies often over-promise about the results of an M&A. They also often fail to prepare accurate research about organizations, products or employees they seek to acquire.

“It’s usually a communication problem—internal and external—that causes mergers not to succeed,” Parnell says. “I think you have to start from a point of view of understanding the culture of the organization that you're bringing into yours, and not assuming that they're just going to adapt to your way of doing things.”

Early on, company communicators should conduct surveys or interviews with consumers and staff, he says. Learn what consumers like about a product. Understand staff attitudes about working for the acquired company. Forcing people to do things, internally or externally, is never going to work.

Regarding Wordle, Parnell says the Times, the acquiring company, should take 60 to 90 days before implementing noticeable changes. Implement changes gradually and transparently, he adds.

The Times acquired Wordle "for a reason,” Parnell says. “There must be elements of that brand that were critical to its success. The value that [the Times] was acquiring, which is a universe of users, may be diminished by any abrupt movements…to the game. The fallout is not worth rushing the timetable. Let people sort of get used to your platform and working with you.”

As stated prior, we live in a society where brands are beloved. Keeping that in mind, it’s important for companies to acknowledge the passion behind their most important stakeholder—the consumer. Dan Levitan, managing director, BerlinRosen, says the Times may have some explaining to do.

"When you acquire a product, you also acquire its super-fans,” Levitan says. “They love every little detail and they will be on the lookout for changes." That doesn't mean changes aren't possible, but they  "should be communicated clearly and carefully to keep trust.

The newspaper, he said, "made a mistake by saying nothing would change and then making small but noticeable changes. You could say they ‘erred.’" (PRNEWS sees what you did there, BerlinRosen.)