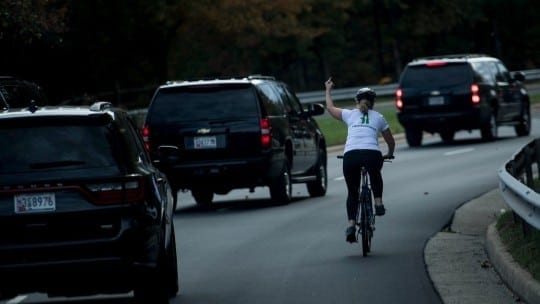 Last week, a photo of a woman riding her bike and flipping off President Trump’s motorcade went viral. The woman in the photo (who many have named a “she-ro” on social media) has been fired from her job.

The motorcade was leaving the president’s golf course when it passed Juli Briskman, a 50-year-old mother of two, on her bike. In an interview with HuffPost, Briskman said that her “blood just started to boil” and she flipped him off.

“I’m thinking, DACA recipients are getting kicked out," she told HuffPost. "He pulled ads for open enrollment in Obamacare. Only one-third of Puerto Rico has power. I’m thinking, he’s at the damn golf course again.”

The photo was captured by a White House photographer, and Briskman told HuffPost that she didn’t even know her photo was taken until it was picked up by news sources and went viral on social media. When she saw it gaining so much traction over the weekend, she went to inform her employer, government contractor Akima LLC, on the following Monday.

HuffPost reports that on Tuesday, Briskman was fired. Her crucial mistake: making the photo her profile picture on Twitter and Facebook.

“They said, ‘We’re separating from you,’” Briskman told HuffPost. “Basically, you cannot have ‘lewd’ or ‘obscene’ things in your social media. So they were calling flipping him off ‘obscene.’”

According to HuffPost, Briskman worked in marketing and communications at Akima for just over six months, and is arguing against the termination because her social media pages don’t mention Akima as her employer. While we don’t know Akima’s exact social media policy, many companies have taken similar actions—in the eyes of employers, an employee’s personal social media pages reflect on a company.