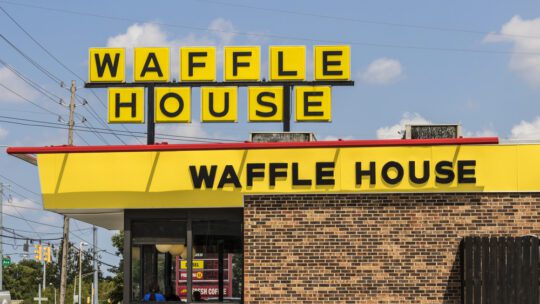 It takes a pretty big event to close a national institution like Waffle House. Especially when it has its own disaster meter. Coined the “Waffle House Index,” it is not an official metric, yet government agencies such as FEMA use it.

Unfortunately, Hurricane Ian challenged the index this week, causing the breakfast chain to announce a shutdown of 21 restaurants in the storm’s path.

However surprising to many who hold Waffle House in great esteem for its 24/7 hour service, instead of anger, many followers expressed awe and respect for the dire circumstances.

Since apparently people have decided to slag on Waffle House today, allow me to say a few words, as a transplant to the South, about this institution.

Waffle House goes harder than 99% of us will ever go in our lives.

The waffle House being closed is one of the most terrifying things I have ever seen.

Digging deeper, you discover Waffle House takes its business and reputation seriously. Evidence is in the brand's disaster-preparedness plans, created after Hurricane Katrina, in 2005. The Wall Street Journal says the brand lost seven restaurants in that storm, and closed 100—which quickly reopened.

It adds that Waffle House's crisis-preparedness process includes a manual for reopening after a disaster, setting up portable generators and mobile command centers.

So yes, the company is prepared. However, it also knows its limits. It understands remaining open or closing will influence not only employees but customers.

“It's just not safe to be out in these major hurricanes," says Chris McMurry, COO of PR firm MGH. As such, "it's not reasonable to think that "always open" can mean 100% of the time anymore." He adds that "more major hurricane landfalls will make full shutdowns...a more common occurrence.”

"Waffle House's jump teams, which help a restaurant location operate when local employees may be unable to work in the wake of a storm, focus efforts on reopening as quickly as it is safe to do so,” he says. “This allows Waffle House to remain a reliable place where first responders and utility workers...can go for a meal after a long day."

Other companies weren't as adept as Waffle House this week.

Postcardmania, a marketing firm in Florida, became the subject of embarrassing news coverage. Word leaked on social that its CEO said the office was akin to a “hurricane shelter” and encouraged employees to brave the storm and report for work. Ian wouldn’t be a big deal, the executive added during a meeting.

It was only at the last minute the company told workers to stay home.

Employees at marketing firm @postcardmania in Clearwater, Florida are not only being asked to work through the hurricane, but are being told to *bring their kids and pets to stay at work overnight* so as to "continue to service our National clients." pic.twitter.com/I9sV1gjDmA

A Much Better Outcome

On the other hand, Waffle House's decision to close some locations connects with its purpose as an organization and will bolster its reputation with employees.

“Being 24/7 for all stakeholders includes employees, and prioritizing not only employee but customer safety speaks to a story shared on its website,” says Cat Colella-Graham, an employee-experience consultant. (“We aren’t in the food business. We’re in the people business.” – Joe Rogers, Sr.)

She adds, closing for safety reasons “leans into authentic leadership, care for employees, customers and the community. [It] will serve well to instill employee pride and attract talent.” That's important in "an environment where employees have been known to make or break a brand, as we have seen in an accelerated way in the last year,” she says.

“Waffle House clearly is paying attention and committing to employee wellbeing and experience.”

Waffle House’s response and preparation are impressive, McMurry says, citing the company as a good example of being nimble in a challenging moment.

“Forces beyond your control may change your brand's ability to operate the exact same way as it has in the past." The key, he adds, "is connecting a new approach to the overall spirit of the brand promise and proving it with actions that resonate with customers.”