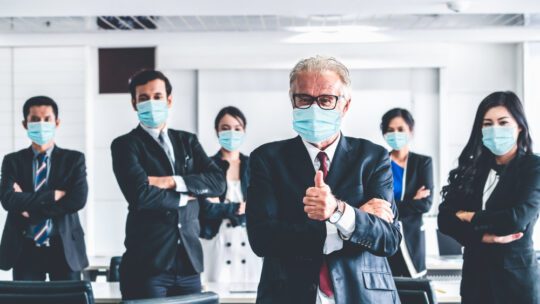 United Airlines is terminating nearly 600 employees for failure to comply with a coronavirus vaccine mandate it issued in early August. The company announced all employees must be vaccinated once the vaccine received U.S. Food and Drug Administration approval (Aug. 23 for the Pfizer-BioNTech vaccine) or by Oct. 25, whichever came first—or risk being fired.

United was the first U.S. airline to issue a mandate. Employees still have the chance to get vaccinated before their formal firing meetings, according to the company. Unvaccinated employees make up nearly one percent of United's 67,000 employees.

United CEO Scott Kirby and president Brett Hart doubled down on safety as their core message to employees. “This was an incredibly difficult decision but keeping our team safe has always been our first priority,” they wrote in a memo the press obtained.

Speaking to The Guardian, a United communicator discussed the vaccination mandate long term. Vaccination status, the person said, is a requirement for new hires, including students at its pilot school. Evidently responding to concerns that a vaccine mandate might deter employee recruitment, the spokesperson pointed to the numbers: 20,000 people applied for 2,000 flight attendant positions in the last month.

In addition to the internal memo, United conducted executive thought leadership on LinkedIn, with Kirby posting about the carrier's “historic achievement.” Again, emphasis was on employee and customer safety: “Our rationale for requiring the vaccine for all of United’s U.S.-based employees was simple–to keep our people safe–and the truth is this: everyone is safer when everyone is vaccinated.”

Kirby also lauded the company, saying “nearly all” employees were vaccinated, emphasizing that terminations impacted a small fraction of workers.

Replies to Kirby’s post were a mix of supportive comments and anti-vaccine sentiments, with some linking to misinformation—surprising, given that many LinkedIn users tend to use the site for professional circles and shuffle their political views to platforms like Facebook and Twitter, thereby shielding those posts from employers.

“Wow you are proud that you forced your employees to get the vaccine in order to keep their jobs. You made them choose between their freedom or feeding their families, between their believes and their career,” wrote one user, listed as a full-time employee of aviation company AAR Corp.

While some voiced discontent at the terminations, many commended Kirby.

“Kudos to United for this decision—aviation is built upon a backbone of science and knowledge, not the misgivings of a vocal minority,” a user wrote.

To the latter commenter’s point, focusing on the science is a must for communicating vaccination policies, says Cat Colella-Graham, an employee communication expert and founder and partner at Cheer Partners.

“Always follow the science, and with the support of the Equal Employment Opportunity Commission (EEOC) and Department of Labor, leaders are now fortified to put the health and wellbeing of their employees as an unwavering priority.”

Indeed, the EEOC posted resources and FAQs here, with a May 2021 statement that reads: “Federal EEO laws do not prevent an employer from requiring all employees physically entering the workplace to be vaccinated for COVID-19, so long as employers comply with the reasonable accommodation provisions of the ADA and Title VII of the Civil Rights Act of 1964 and other EEO considerations.”

And, recent stories on NPR, in The Boston Globe and Politico and various legal publications have raised awareness around the legal precedent that exists for employers and the government to issue vaccine mandates.

“It's important to begin with a single source of truth that not only shares the company policies but also shares FAQs and guidance from the Centers for Disease Prevention [and] World Health Organization, grounding policies in science.”