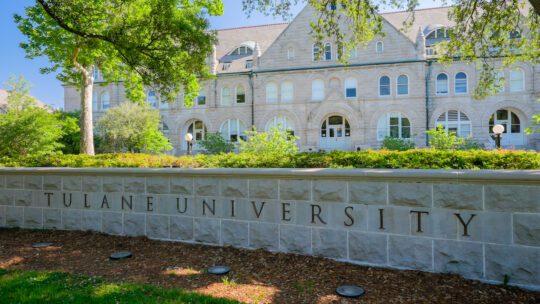 It’s been a tough start to the week in New Orleans, to say the least. Hurricane Ida hit the Big Easy Aug. 29 as predicted, leaving much of the city, and most of southern Louisiana, without power.

Thankfully many citizens heeded calls for evacuation, heading out of Ida’s destructive path. But many college students weren’t so lucky. Eight colleges are located within New Orleans’ borders, and 40 more sit within 100 miles of the city. Unfortunately, many schools did not evacuate students. Instead, they provided food and encouraged them to shelter in place.

Tulane University used social media to communicate with students and the public.  It faced a backlash for its decision and messaging.

In this Twitter thread, Tulane communicates its emergency policy. It also reveals how many students are left on campus, as well as steps it has taken to prepare.

However, this tweet caused a stir, particularly with meteorologists, parents and some onlookers. The university blames the hurricane for shifting paths from the original forecast. For anyone who followed the storm, as well as the warnings about it heading straight for New Orleans, this seems somewhat deviated from the truth, and the public let Tulane know it.

Ida’s path deviated from what forecasters had predicted as recently as yesterday morning. However, we are confident we have taken every precaution and that we will weather this storm as we have others in the past. Please visit https://t.co/dcHrYcm5Uw for more information.

No, enjoy a video of the entire history of eye path projections pic.twitter.com/DOoSQzR4hm

Don't deflect responsibility if you didn't prepare adequately. Ida was superbly forecast. It went right where forecasts from three or more days ago said it would. I expect better from an institution like yours.

The NHC got Ida's landfall location within 50 miles of the correct place 4 DAYS out. One of the best track forecasts of all time. What on Earth are you talking about???

You are recruiting my daughter, heavily, to attend your institution. If this is the type of higher learning she can expect to receive, you can stop sending us all emails and literature. You’re clogging up from actual, real places of higher learning.

As if the backlash couldn't get worse, anyone could see the damage by looking through Tulane students’ TikTok accounts. Many posts were upbeat as students used humor to get through the experience, but some showed leaking ceilings, flooded rooms and crumbling walls.

Earlier today (Aug. 31) Tulane began evacuating students to Houston as much of New Orleans is without electricity. Tulane president Mike Fitts documented the process on Twitter. Most responses here expressed gratitude for getting out students safely.

Our students are starting to leave for Houston this morning. I cannot thank everyone enough for their support and dedication during this time. I am proud to be a Tulanian today and every day. pic.twitter.com/iqC6zPnM4D

However, the failure to evacuate until today may leave a bad taste in the mouths of not only parents, but the public, not to mention the students.

How can Tulane communicators rebuild trust and ensure a safe return for students?

Lori Perlow, public information officer, Communications Consortium, for Haddon Township School District in New Jersey, believes Tulane needs to “take ownership” of its mistakes. In addition, it should ensure students have all necessary resources to live through this “traumatic event.”

She points to the school's poor preparation.

“Every educational institution prepares for crises of all kinds,” Perlow says. “In some regards, extreme weather events are slightly easier to manage since they come with advance warning from trained meteorologists."

She adds, "After Tulane’s social media attempt to shift blame to the weather forecasters, it seems that they’re now on the hook for what appears to be a lack of planning to get all students to safety in advance of Ida making landfall.”

“Instead of looking backward and getting into any debate or defensive conversation over their past statements/actions/inactions, Tulane needs to stay focused on how they are supporting and accounting for their students and making all efforts to ensure they continue to receive the education they are expecting,” Moyer says.

Nicole Junas Ravlin, president and CEO at Junapr, who works with educational institutions, gives Tulane some grace. The PR team likely is local, she says, so its members were working and also worrying about their own safety.

“This is one tweet that took on a life of its own,” Junas Ravlin says. “If you consider all of the information that Tulane has put out on Twitter and other channels, that information is good (and helpful). This tweet was a bit tone-deaf and misguided because of the first sentence. When it's a crisis situation, ensuring that you're sharing very precise information that can help people make decisions is critical.”

“NOLA is no stranger to natural disasters, and neither is Tulane,” she says. "Revisiting your crisis plan every year and evaluating all past situations and best practices is critical—especially when it comes to colleges and universities that have a number of young adults likely having to navigate a storm for the first time on their own."

"Having some guidelines or sample social media posts—or even a playbook—is handy. Doing as much work as possible to prepare for crisis or disastrous situations is essential—for all businesses and organizations, not just higher ed.”