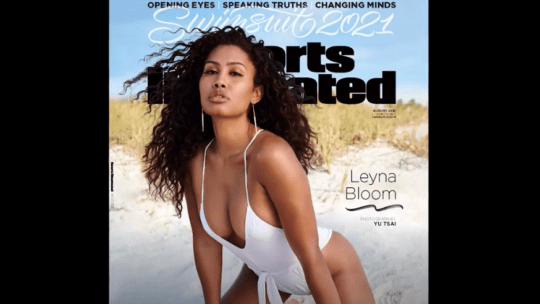 This week Sports Illustrated released its 2021 Swimsuit Issue. While some may be surprised the publication still exists in the shadow of the #MeToo movement, SI is utilizing the platform to leverage a message of inclusivity. Its 2021 edition features the first cover with a transgender model, Leyna Bloom.

Bloom sees the moment as another step toward greater acceptance of the transgender community. On Instagram she wrote: “This moment heals a lot of pain in the world. We deserve this moment…Many girls like us don’t have the chance to live our dreams, or to live long at all. I hope my cover empowers those, who are struggling to be seen, feel valued.”

However, some may wonder if the Swimsuit Issue is moving in the right direction or if it's missing the mark on messaging with an antiquated product.

First published in 1964, the annual edition seems to have made strides over the years on inclusivity. It welcomed its first Black cover model, Tyra Banks, in 1996. In 2019, the issue featured its first Muslim burkini model, Halima Aden, and its initial openly gay model, Megan Rapinoe. And last year, the edition debuted its first transgender model, Valentina Sampaio.

Ann Thomas, founder of Transgender Talent in Los Angeles, welcomes the move and sees it as a boon for the industry.

“A few years ago we submitted one of our model clients to SI and they weren’t ready for it,” Thomas said. “As a trans woman myself, brava to SI for putting Leyna on the cover and finally stepping into the future, reflecting the diversity of all women. It’s a great move forward in the humanization and normalization of all trans women, and it’s about time.”

“It’s really important to remember that in a culture where transgender women have been seen as only something to be fetishized behind closed doors—and subject to intense violence, unworthy of the love and adoration that cisgender women inspire as well, this is a huge move in the right direction,” Anderson-Minshall says. “[Bloom] is a pro model, and the fact that she can pursue her career as well as any other model is a move forward for all women.”

Evie Smith Hatmaker, founder and CEO Rebellious PR, sees the cover as a move in the right direction, but wonders if it will really make an impact on the core audience.

“I both love the SI Swimsuit Issue and hate it,” Smith Hatmaker says. “I think it's past its prime, very similar to the Victoria's Secret runway show. These are dated institutions solely created for the CIS, straight male gaze (similar to a swimsuit competition in a beauty pageant). I do think it is rad to see trans representation on the cover of the magazine. I just don't know if the core SI audience is really picking up that issue to [have] their minds expanded and their eyes opened.”

The PR executive foresees detailed social listening and buyer demographics as keys to determining the success of this and future inclusive publications.

“I think success for SI is attracting new readers to the Swimsuit Issue,” she says. “How do sales and demographics of buyers compare to other issues they have run? Obviously, if it is wildly successful the publication will feel more inclined to be more inclusive—money is always a motivator. Also, social listening; what are people saying and what is the sentiment?”

Smith Hatmaker of Rebellious PR believes the LGBTQ+ community is far being universally embraced, but she also considers the Sports Illustrated cover a win.

“As a queer PR person, it feels a bit like SI really wants to pat themselves on the back for this kind of inclusion, but, of course, there is a lot more work that needs to be done,” she says. “These blatant, mainstream sexist institutions are dying for a reason, but if on their way out they have an inclusive death rattle, I'll take it.”