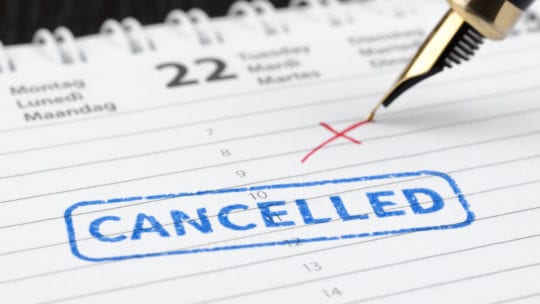 You hear about it often: a business is #canceled or a person’s reputation is wrecked because someone posts something somewhere that's construed as offensive. And it happens in a blink. Suddenly, a successful company or person is struggling to remain relevant, or financially solvent.

Take Kevin Hart. He was slated to host the 2019 Academy Awards when a series of homophobic tweets from years ago surfaced. Hart had to step away from the prestigious event. A big chance was gone.

In a world where online rage mobs wage war over mistakes, there is still hope. The key is preparation; be ready for the next attack. It is the most obvious yet valuable piece of advice in crisis management.

Regular people and businesses of all kinds are losing contracts and getting harassed and boycotted online for situations they could have avoided. Although there is no foolproof way to safeguard you or your business from online attacks, here are steps to help move forward if cancel culture crusaders target you.

Let’s assume you've got the basics, such as a crisis PR plan. And that part of your plan includes monitoring social channels, so you know what people are saying about you or your brand. Stop combing through social media platforms manually. Purchase monitoring software, which can alert you to damaging digital conversations.

Say you discover disturbing online dialogue about your brand. Is the chatter serious enough to merit a response? Is the poster an influencer with enough clout to harm your reputation? Or are the allegations so ridiculous that acknowledging them would be a mistake?

In general, respond. If the comments are blatantly false, you may be able to have them removed. On the other hand, when the criticism is accurate, own it and resolve it. Ignoring negative commentary is not the best route.

When dealing with a touchy topic, share with care and think before you post. Many victims of cancel culture violate this simple rule. They pay the price because their posts were thoughtless.

Take the case of an Indiana Taco Bell employee who tweeted a photo of himself urinating on an  order. His goal was to win the admiration of a revenge-porn media magnate. He did and also got fired.

The instantaneous nature of social media guarantees that someone is always listening. Roseanne Barr’s show, “Roseanne,” was canceled abruptly after news broke that she had posted a racist tweet. Barr apologized but the damage was done.

Social media is a battleground of thin-skinned people itching for a fight. What you say and how can land you in hot water, as people err on the side of outrage. Will your post offend? Be wary if you want to avoid future headaches.

Get Back in the Game

While it may seem counter-intuitive after being publicly pummeled, don’t hesitate to promote your brand aggressively with positive content. If customers voice complaints, apologize and offer to make amends, or explain why their criticism is incorrect.

Stay engaged. Use upbeat images and engaging videos. Show that you are a good person or an organization that does good things. Proceed with confidence.

Doing and saying the right thing can be difficult, but never ever lie. Honesty always is the best policy. Don’t claim to have a spotless reputation if you don’t. The naysayers will be more forgiving if you are truthful. You are certain to go down if you misrepresent yourself or the brand. A heartfelt apology or mea culpa often can prove much more effective than digging in your heels.

Preparation can help companies and individuals react quickly if their comments stir controversy. An ill-conceived social post can have dire consequences with online attackers waiting to seize upon any misstep.