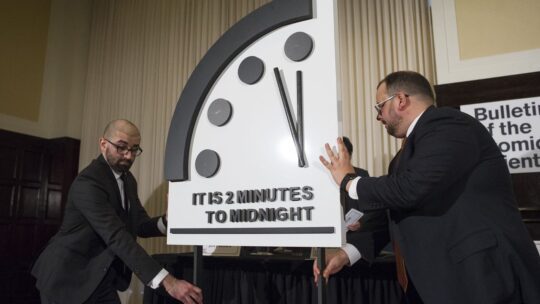 Editor's Note: Every day journalists receive wildly creative pitches. While many may not correlate with their assigned beats (tsk tsk, that’s a PR blunder), some definitely cause one to make a double take.

At PRNEWS we receive some of these interesting pitches. And we wanted to know more about the people behind the pitch. How do PR pros feel about promoting bidets or an adult toy? How do they approach their jobs when tasked with acquiring coverage on an odd product or event? And how did they get involved with this client or organization in the first place?

Our first dive into this new “Offbeat PR” series looks at the PR team behind the metaphorical Doomsday Clock. The Bulletin of the Atomic Scientists created it in 1947 to address the dangers of nuclear annihilation. As the global situation worsens, the hands of the clock move closer to midnight.

While nuclear war remains high on the worry list, the Clock now also takes other global dangers into account, including climate change. Every year the Bulletin hosts an event (virtual during the pandemic) to divulge the 'time,' essentially how close we are to global danger.

Alex Frank and Max Karlin, co–principals at The Hastings Group, lead the communication strategy and delivery for the Doomsday Clock. We chatted with them to see what it’s like to work on such a daunting, yet important project.

PRNEWS: How did you get involved with this?

Alex Frank: I started working with The Hastings Group in 2010, as an intern, and was brought in to the project at a low level. We do a lot of work in the energy and environmental space, so I think it was sort of a natural fit. My focus in college was getting involved in solutions for climate change. It's really something that I feel passionate about in terms of the cross section of politics, media and the environment.

Max Karlin: I was an English major in college, but I also really had a passion for environmental policies and issues, so much so that I wanted to work for a non-environmental nonprofit, out of school. Honestly, if the stars hadn’t aligned like that in a PR job, I probably wouldn't be in this line of work.

PRNEWS: What are your goals when pitching the Doomsday Clock?

Max Karlin: This was an opportunity to really say, "wake up, people." This is important stuff, and you're going to be hearing from some experts that aren't your typical media talking heads.

PRNEWS: How do you feel working on Doomsday Clock?

Max: It's exciting! I think that for most people it’s a household name. It's even entered our language. People use Doomsday Clock just as a way to talk about something that's hitting a breaking point. You see it in sports journalism a lot. There's always like the 'trade deadline doomsday clock.' It's actually funny because it interferes a little bit when you're trying to do keyword searches on media monitoring.

I understand that it has a gloomy vibe around it, but it is an opportunity to elevate issues that are really important, especially to young people. There's a sense of urgency where they're inheriting this world—it's kind of on fire. It's hard to know what issues to pay attention to.

PRNEWS: Any times where it gets rough?

Alex Frank: There're some moments where I feel like we're pretty detached from the message behind it. Because we're in subsequent nitty gritty of promotion, news event details and so forth. And then there's a moment—it's happened multiple times for me because my name is on all the news advisories—I get a call thinking it's from a reporter. And then it will be from someone who really didn't get the metaphor, freaking out about the world ending and asking how much time do they have left, and how much time do they have to prepare?

So when I do get those calls and emails from normal people who have found my name or number on the internet related to the Doomsday Clock, it just kind of hurts because it's so clearly a metaphor and not an actual clock ticking down to Doomsday. That I find to be most downing for myself.

PRNEWS: How do you respond to those messages?

Alex Frank: I'm calm and collected. And just explain that the clock is a metaphor. It's not a literal clock ticking down to demise, and it's more to educate the general public on these issues. It catches you off guard because sometimes I'll be waiting for the subway, and a person will call asking when the world is gonna end, and you have to talk them down for a second.

Max Karlin: PR professionals are no strangers to getting colorful responses. There are also people who are just itching to know what time it will be set to before it’s announced. So there are also superfans.

PRNEWS: What do you hope people take away from this work?

Max: I think that the Doomsday Clock emphasizes being proactive, because yes, you can be really negative about everything going on. But on the other hand, you can also say what can I do, what conversations can I start in my community?