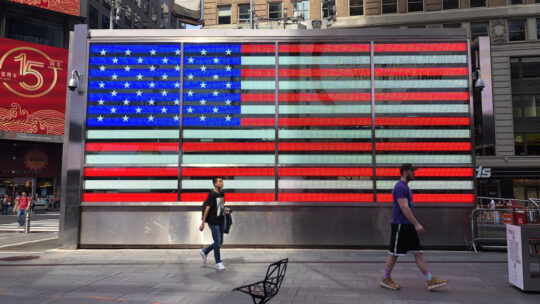 The concept of American patriotism holds a nuanced meaning for different demographics in the country. For some, it represents freedom and opportunity. For others, the nation's history and recent events have tarnished patriotism. Some have found a middle ground between the two.

A Gallup survey points out that sentiment for American patriotism is at an all-time low. Fewer than 38 percent of adults say they are "extremely proud" to be an American. The typical average before this year was 55 percent. Understanding this, brands might consider reevaluating marketing around patriotism.

“There are brands that are kind of birthed out of patriotism,” says Arlook.  “You can't really picture a Ford F-150 without also seeing an American flag. 'Made in America' is a part of their brand.”

In addition, Grabowski alludes to the NFL, Budweiser and traditional blue jean companies that use the same tactic. They often celebrate military service or highlight their American-made status.

This year, though, not all audiences will respond well to this, he says.

Instead, “segmentation marketing is the way to go,” Grabowski adds. “Most Gen X and Gen Z audiences will respond well to talking about sustainability or contributing to a cause. Whereas older generations, especially those in rural or suburban areas, might respond better to patriotic messaging.”

Similarly, Adam Ritchie, principal at Adam Ritchie Brand Direction, is cautious about patriotic messaging. Steer away from it, he counsels, referencing an AP-NORC survey showing 85 percent of  adults believe the country is headed in the wrong direction.

“It doesn't matter who your consumers are," Ritchie says. "If you message around America, they're going to reject it.”

Indeed, Arlook notes a nuanced change in the rhetoric around patriotism after the death of George Floyd. Some companies “began asking...how we celebrate America and celebrate our freedoms, while still acknowledging that not all Americans are truly free and have the same opportunities.”

Branding in the New Climate

Looking at the Fourth of July, Arlook proposes reframing discussions around patriotism. When examining its roots, she asserts that pride in your country should allow acknowledging its flaws, but hold that “the country can live up to the ideals that it set out for itself.”

“If we're thinking about the calendar, [does] patriotism really only [include] holidays where we're waving the American flag?" says Arlook.  “If we're looking at celebrations like Black History Month or Martin Luther King day, celebrating those is also patriotism, right? It's pride in the people who have made this country better than it was the day before. ”

In contrast, for July 4, Ritchie recommends reaching “beyond patriotism into a larger place in the American consciousness.”

“There's plenty of room for campaigns to focus on time with family and friends, trips and food,” says Ritchie. “Do you think Cheetos is wrestling with this? They're probably partnering with Clorox wipes to help consumers keep orange dust off their fireworks. That's how to approach it this year.”

Andrew Byrd is a media associate at PRNEWS.