On Tuesday, Vice President Mike Pence drew ire on social media and in news outlets after he appeared in photos and video without wearing a mask on a visit to Mayo Clinic coronavirus patients.

Mayo Clinic posted a tweet noting that Pence was advised of their mask requirement, but later deleted it: 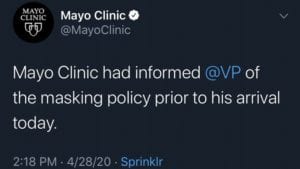 Later, Mayo Clinic “blandly” (per Vox) tweeted a belated thank you to the Vice President. Some onlookers might find this the social media equivalent of smiling through gritted teeth:

We are grateful that @VP and @GovTimWalz visited Mayo Clinic today to hear about our work fighting the #COVID19 pandemic. We look forward to continued collaboration to develop essential testing and treatment for our patients and communities.

According to the Minneapolis Star Tribune, Minnesota Governor Tim Walz advised Pence to adhere to the mask-wearing policy. The New York Times called flouting the mask requirement “a decision in line with Mr. Trump [who] said this month that he would not follow guidelines from his own Centers for Disease Control and Prevention and wear a face mask.”

Pence’s justification? That he is tested for coronavirus on a regular basis, “and everyone who is around me is tested for the coronavirus,” as he told reporters. Medical professionals told multiple outlets covering the story that regular tests are no guarantee of preventing transmission of the virus. Pence’s “do as I say, not as I do” approach has not played well in the mainstream media or on Twitter.

The point of the mask is to protect other people from you. Pence says it was more important that he be able to look people in the eye than to protect their safety? The best was to show gratitude is to mask up. https://t.co/TOC28Os7nP

Opinion: Pence is unmasked as a lousy role model https://t.co/qt8ul3SvjQ

As for Mayo Clinic, the tweet deletion may have been the best possible response to the potential crisis—allowing the fact that the vice president defied the Clinic’s policy float around the Twitterverse long enough to gain notice, but not long enough to take extended heat from the White House. A spokesperson reiterated the message to CNBC in an email: “Mayo shared the masking policy with the VP’s office.” The spokesperson did not comment on the tweet deletion—a smart communications move, given the potential for open defiance of the White House.

Despite the PR blip, Mayo Clinic came out relatively unscathed in the media—a top medical facility whose hands were tied by the executive branch of government—while the vice president’s office still has much to answer for in the court of public opinion.

Update, April 30: On Thursday morning, second lady Karen Pence told Fox & Friends that her husband was not told about the mask requirement before his visit. Mayo Clinic has yet to tweet or issue a release regarding the controversy since Wednesday, perhaps waiting for the news to play out in local media and grow stale rather than prolong a he-said she-said debate.