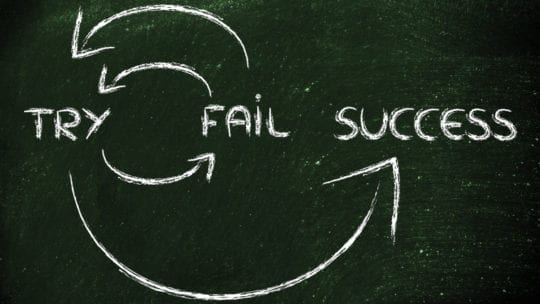 [Editor's note: There is a proverb that says, “Failure is the mother of success.” And we, as business professionals, know this to be true. But it’s a concept that has a strong historical foundation. Thomas Edison tried thousands of different ways to invent the light bulb before he

discovered his life-altering solution. Babe Ruth may have scored 714 home runs during his career, but also held the record for most strikeouts at 1,330. The great restauranteur Colonel Sanders had his now-famous recipe for fried chicken rejected over a thousands times by restaurants before one accepted it. Failure is the mother of success. Struggle is the best educator. And innovating and failing fast has become a top business strategy.

In this PRNEWS series, in partnership with the Institute for Public Relations, some of the most successful leaders in the industry will share the lessons they have learned from failure.]

If I had a dollar for every business mistake I’ve committed, I’d be sitting atop the Forbes 400 list. Alas, based upon my multiple failures, I’m lucky to be standing at all.

But, as is the case with most of us (and especially those of us who proudly call ourselves entrepreneurs), failure is a necessary part of success. Failing (both fast and slow) has taught me countless lessons and, more important, how to best avoid future missteps.

So, let’s hop in a specially designed time machine and revisit the mother of all my business mistakes.

The year was 2005, and Peppercomm was growing again. We had successfully repositioned ourselves in the aftermath of the dot-com implosion and created a number of new service offerings following 9/11, when many clients believed it was no longer appropriate to engage in any form of marketing.

We had successfully attracted several Fortune 500 clients, including a multinational manufacturing company and one of the Big Three in Detroit. The CCO of the mega industrial firm was over the moon with our early successes on his account and told us to begin staffing up because, he said, “I intend to be Peppercomm’s largest client.”

At the same time, the top kick at the Big Three automaker also had exciting plans for us. He called me and said, “I’m dumping our global AOR and replacing them with you. We’re talking about a $4 million account, so be ready when I give you the green light.”

In one fell swoop, we were about to double Peppercomm’s billings!

As you might expect, we held a celebratory party and quickly began recruiting talent.

While the fog of war clouds the precise number, I’d guess we hired at least 15 full-time employees at all levels (hoping we could handle the rest with freelancers).

And then a funny thing happened on the way to the bank.

First the CCO of the manufacturer was accused of malfeasance and, get this, led out of the office in handcuffs. I called his direct report, who said, “I’ve been told to immediately end any agency relationships he had in place. We’ll honor the 30-day termination notice.”

Then, and I kid you not, I received a phone call the very same week from the top kick at the auto company. He was beyond excited. “Congratulations are in order, Steve!” he shouted. I thought there would be even more new business that would, hopefully, offset the disappearance of the industrial client.

But then he explained that he’d accepted a major position with a Top Five PR firm and would no longer have to commute to and from Detroit. “I’m beyond thrilled. Isn’t this great news?”

I nearly fainted, but quickly composed myself and asked the obvious question: “So what does this mean for Peppercomm and the $4 million account you were about to give us?”

The silence was deafening.

“Hmm, I hadn’t thought about that. Let me ask.”

Long story short, his boss was not about to follow through on his decision. My buddy called me a few days later and said, “Sorry, dude. It’s no longer in my hands.”

So, in a time frame shorter than a fortnight at Wimbledon, I had not only lost roughly $10 million in billings, but also had 15 new employees being onboarded! Their collective salaries alone far exceeded our billings.

There was only one thing to do. I called in each new employee and fired them. If I hadn’t, we would have been forced to declare Chapter 11.

I then called a staff meeting and explained to everyone what had happened. The looks of dismay and disappointment will remain with me to my dying day.

Needless to say, we survived and eventually regained our mojo.

But the massive failure taught me two invaluable lessons:

And more to the point, I will never again hire scores of people based upon the verbal assurances of relatively new clients that I don’t know very well. I’d much rather rely on freelance support until I know for sure that promises made will be promises kept.

In the meantime, while I still aspire to top the Forbes 400 list, as an avid mountain, rock and ice climber, I will happily settle for making Alpinist’s best paid climbers list.

Steve Cody is CEO of Peppercomm and Chair of the Institute for Public Relations.