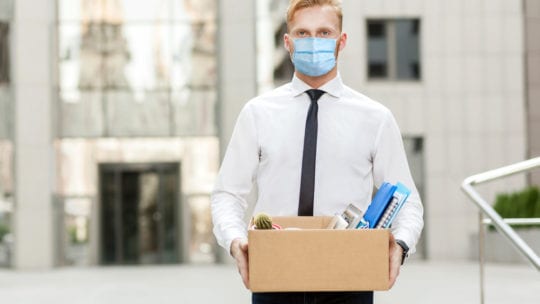 You can imagine reading the headline. Recently, there was a header about the e-cigarette company Juul. The company will cut 800-950 jobs, sources speculated in the April 29 article. More company changes at Juul leaked last week.

Weeks before, on April 13, it was a story about ESPN. Sources said the sports network asked its 100 top on-camera talent to take voluntary pay cuts. C-suite salary cuts and other changes at NBC earlier this month were leaked. In that case, though, employees received a memo prior to the media story. This afternoon there was a tweet (see below) about imminent changes at Morgan Stanley. Hours later the company said the story was untrue.

Losing your job is never easy. Even an appreciative letter from the CEO will do only so much to soften the blow. Still, one of the worst ways to find out your job is gone is to learn about it in the media. Reading stories containing confidential memos and other sensitive details has to be unpleasant for staff and management.

These stories will happen. Especially when job losses are rampant. It's a cruel irony, but reporting about job cuts, furloughs and salary cuts is a growth industry now.

While communicators' ability to stop such stories is limited, they can play a role in reducing them.

HR usually has the ignominious job of announcing and executing job cuts and furloughs. In smaller companies, PR pros be involved in the HR sphere. More important, PR pros handle internal communication. Ideally, internal communication can set the stage for employees to learn about corporate changes before they appear in the media.

Internal communication, however, might be the toughest part of the PR pro’s portfolio. At many companies, internal communication is ignored or is a low priority. “Most companies don’t communicate with their employees,” so when changes occur, staff often is surprised, says James Olecki, head of strategic advisory at Status Labs. Now, in the pandemic moment, "'We’re all in this together,' but companies still don’t want to communicate,” he adds.

What, then, can communicators do to lessen the chance that speculative layoff stories will appear before employees have been informed? Fortunately, many of the tips below carry over from basic concepts in crisis management and internal communication.

One preventative approach is to understand why staff leak information. Employees are venting their anger when they leak internal news, says Meredith L. Eaton, N. America director, Red Lorry Yellow Lorry. “They are frustrated, confused, angry or afraid and they want to…inflict some kind of damage on the company that wronged them.”

To mitigate this possibility, she says, communicators should offer all staff members clear, direct and transparent information about the reasoning, timing and business impact of the pandemic and resulting furloughs, layoffs or salary cuts.

In addition, it's important to communicate “the external perception and brand reputation risks of [sensitive employment] information leaking,” Eaton adds.

Be The Information Source

“Rumor mills are deadly to companies right now,” Mitchell says, and since so much of it is happening in online environments, “it’s almost impossible to regulate.”

This is where a tradition of consistent and transparent internal communication can pay off. Even if a company has not communicated much with staff, "executive teams that have been transparent from the beginning [of the pandemic]...will not only gain credibility but mitigate the fallout of any potential future actions such as layoffs," Olecki believes.

And similar to any crisis, during the pandemic, Mitchell says, “keep employees looking to you for accurate information.” Commit to regularly communicating, "so they don’t go looking elsewhere for the answers," she adds.

Pandemic or not, make sure internal communication is consistent and transparent. “If [employees] feel you’re withholding information, frustration will mount. That’s when gossip and speculation find their foothold,” Mitchell says.

In addition, it’s important to manage employee expectations. “Anticipate [employee] concerns about the stability of their job, and the outlook for your business. Give them honest information and answers.”

A PR hallmark is clarity, of course. Yes, the future is cloudy, yet now is not a time for "gray areas or obfuscation" in your internal communication, Mitchell believes. "Be transparent about challenges facing your business and the industry as a whole."

Another tactic is to adjust use of technology to prevent leaks. “There is a fundamental lack of understanding about how data and communications are leaked,” Olecki says. Technology has allowed companies to transition easily to work from home during the pandemic. On the other hand, he says, with so many people working from home, conditions exist for a “dramatic increase in the potential for leaks.”

Email platforms like Gmail, many apps, video cameras and smart-home devices “have all been proven insecure,” Olecki adds. As such, it is likely some leaks are accidental. Employees are unaware of hacking schemes.

This is where PR pros can join with IT to communicate around safeguards. A catchy way to relay this message is to couple it with the need for hygiene. For example, Rokk Solutions of Washington, DC, suggests employees practice cyber hygiene as well as personal hygiene during the pandemic.

In addition to keeping confidential communications to a small, trusted group, such messaging should be “done over encrypted technology platforms,” Olecki argues.

Know Something, Say Something

On the other hand, as soon as you know something, say something, Mitchell says. “Even if you haven’t done all the detail work, let staff know that the company is looking at cost-cutting measures, and that furloughs may be a part of the picture.” This allows workers to prepare emotionally and financially.

While you don’t want to scare employees, you also should not make promises you may not be able to keep. “False reassurance is not a good thing right now,” Mitchell says. Most employees will appreciate “a good dose of realism.”

Avoid Too Many Updates

While many PR pros counsel overcommunication during a crisis, when job cuts are involved, there’s a delicate balance, Eaton believes.

“One thing I’ve seen gone awry though is too much intermittent communication in the name of transparency, without anything concrete to say.” Too many updates that say the business is evaluating the situation and determining the best course of action for employees “may put people on edge about something looming and can lead to people going to the press out of frustration.”

Similar to the tip above, a key to managing layoffs and avoiding leaks, Olecki suggests, is planning ahead and “doing it in one fell swoop.”

Of course, owing to tremendous uncertainty, many companies are running their businesses day-to-day.  Quick decisions, on employment and other matters, are a thing of the past. “This increases anxiety with the remaining employees,” he says.

Planning various scenarios and implementing changes once will allow subsequent internal communications “to be more effective in removing angst and rebuilding morale.”

And, as mentioned previously in PRNEWS' coverage, internal and external communication must be done with sensitivity during the pandemic. "The severity of the disease," Olecki says, "coupled with the mandated defensive measures...has had a profound effect on the human emotional state.  This is a different level of stress and anxiety that must be considered" in internal communication to avoid "damaging sensitivities and misinterpretation of key messages."

Seth Arenstein is editor of PRNEWS