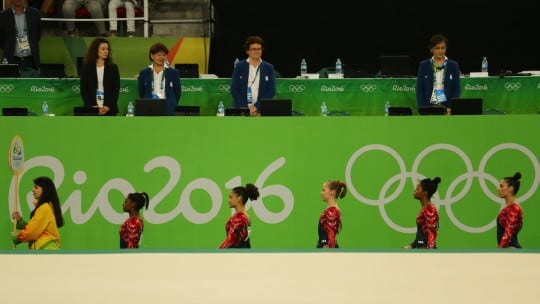 Over the past week, the sentencing hearing of Larry Nassar, the former doctor for Team USA Gymnastics, has been full of shock and emotion. The testimony of 156 of Nassar’s victims will no doubt go down in history.

As young girls they were victims, but now these women are a strong army of survivors who came together to condemn their abuser, resulting in Nassar’s sentence of 40 to 175 years in prison.

“I signed your death warrant,” Ingham County Judge Rosemarie Aquilina said as she delivered the sentence.

But getting Nassar thrown in jail for the rest of his life is just the middle of this story. It has brought to light bigger questions of how this could go on for so many years and with so many victims, and how to prevent this in the future.

And then there's also the question of the fallout for organizations that are caught in the web of this story that already spans decades.

The crisis has had immediate effects, including the resignation of three USA Gymnastics board of directors executives. On Jan. 24, Lou Anna Simon, the president of Michigan State University, where Nassar had been employed as a team doctor since 1997, announced her resignation, specifically pointing to the Nassar investigation as a cause.

PR News spoke with two crisis management experts, Andy Gilman, president and CEO of CommCore Consulting, and Kevin Elliott, U.S. director, risk & crisis communication practice at Hill+Knowlton Strategies, to get their take on the responses to the Nassar sentencing hearing from USA Gymnastics, the U.S. Olympic Committee and MSU.

Keeping it short is probably safest, but meaningless

Looking at the statements over the past week by USA Gymnastics, the overall impression is that they are too short to say anything meaningful, according to Gilman.

“I think these statements were written by a lawyer,” says Gilman. “It’s better than just ‘no comment,’ but if I’m a gymnast or a family member, this does not make me feel warm and fuzzy.” Nor does it give any indication of what is going to be done to prevent this in the future.

“It’s relatively easy and formulaic, at this point, to put out statement,” Gilman says. “The U.S. Olympic Committee’s statement is much more in depth and more specific.”

Hill+Knowlton's Kevin Elliott says that sincerity is key in any apologies or statements. “If they are going to be effective, they must be authentically empathetic; they have to acknowledge the impact to the victim,” he says. “They also have to clearly enunciate the responsible behaviors that they are taking in response to the circumstances.”

Nearly the opposite of the USA Gymnastics’ statement, the USOC’s statement is longer and speaks to the victims directly, and without the coldness of legalese.

“The purpose of this message is to tell all of Nassar’s victims and survivors, directly, how incredibly sorry we are,” the statement from Scott Blackmun, CEO of USOC, says. “We have said it in other contexts, but we have not been direct enough with you. We are sorry for the pain caused by this terrible man, and sorry that you weren’t afforded a safe opportunity to pursue your sports dreams. The Olympic family is among those that have failed you.”

Have concrete examples of what you’ll change in the future

The USOC’s statement is the only one that included solid, actionable steps that will be taken in response to these events, clearly listed out.

The resignation letter from Lou Anna Simon of MSU, and the statement from the MSU Board of Trustees that followed, did not have actionable steps, but did contain the classic promise to “work through the details” of the transition.

In addition, Simon’s statement contradicts itself. She says that she has “tried to make it not about me,” but in resigning at this time, she is making it all about her in the eyes of the media.

“As tragedies are politicized, blame is inevitable. As president, it is only natural that I am the focus of this anger,” the statement reads. “I understand, and that is why I have limited my personal statements. Throughout my career, I have worked very hard to put Team MSU first. Throughout my career, I have consistently and persistently spoken and worked on behalf of Team MSU. I have tried to make it not about me. I urge those who have supported my work to understand that I cannot make it about me now. Therefore, I am tendering my resignation as president according to the terms of my employment agreement.”

There's no crisis management cure-all for organizations linked to heinous, life-destroying and unchecked behavior like Larry Nassar's, Elliott says, but there should be a guiding principle—learn from your errors, and show that you're learning and changing. “When any organization or company has been involved in something like this, the public wants to know what they’ve learned and how change will come forward to make a better future," he says. "As children, we all remember our parents asking us what we learned from a mistake or a misstep—it is the same here."