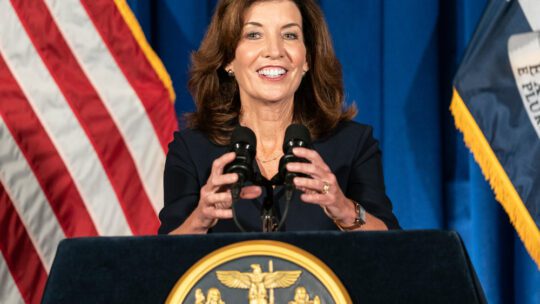 As she tested the mic, Kathy Hochul, current Lieutenant Governor and incoming Governor of New York, flashed a little of her trademark charm at a press conference at the State Capitol on Aug. 11, her first of several press appearances since Gov. Andrew Cuomo’s resignation a day earlier.

Gov. Cuomo, who will retain his title until his resignation becomes effective Aug. 24, has been at the center of the news cycle on the national, and even global, stage as a New York Attorney General investigation uncovered years of Cuomo’s sexual harassment of women staffers, many of whom came forward in recent months.

Hochul is now faced with the steep task of restoring faith in an office marred by scandal, as well as positioning herself as a chief executive with the chops to steer New Yorkers through the next phase of the pandemic and economic recovery.

She has now officially taken the national stage, appearing on CNN’s “State of the Union” Aug. 15. Anchor Jake Tapper threw a hardball question: “Can you promise New Yorkers that you will end this legacy of sleaze?” In response, Hochul put a focus on her ethics and confidence in her track record. “It won’t be difficult for me,” she said. “Everyone who has known my career over 27 years of elected office knows that I have very high ethical standards, and I will go in there and literally say ‘It’s a whole new day.'”

Similarly, on CBS’ “Face the Nation,” Hochul doubled down on a frequent talking point in recent days: her commitment to overhauling the toxic work culture that paved the way for her soon-to-be predecessor’s abuses. “The culture will be changed 1000 percent...I want every young woman, just like I was a high school assembly intern, to realize that this is a place where they have a role. We need their voices,” she asserted.

Laura Gross, president of Scott Circle Communications, a Washington, D.C.-based firm with a focus on government and nonprofit communications, says Hochul has done a good job so far, but that national appearances shouldn’t be the be-all and end-all. “National interviews always get a lot of attention…however Hochul has to remember local press too,” she says.

Gene Grabowski, principal at kglobal agrees, noting that the local publications will be the most likely to skew negative in terms of coverage. As compared to national publications, he says “it’s likely the local and state media will be a harsher judge of her administration and will quickly pounce on any unpopular action or misstatement.”

Luckily, following her national appearances, Hochul made a local press stop, visiting the Erie County Fair in Hamburg, N.Y. to savor deep-fried cookie dough, chat up a kindergartener and feed a calf, playing up her history as a former Buffalo congresswoman who still remembers her roots. Clearly, she is positioning herself as a politician who will lead “with charm, not fear” as a second rosy Buffalo News article puts it.

A reputational hazard on the horizon

But not all of the week’s coverage was so positive. Over the weekend, The New York Post aired a potential conflict of interest for Hochul: her husband’s casino and concessions business, which has benefited from government contracts. Hochul responded, “I understand concerns, and I’ve reached out to outside ethics experts to come up with these ironclad policies so no one will ever question that there’s any involvement of my husband and anything pertaining to the state of New York.”

Gross is less than impressed with the "outside experts" promise, which she says “is not enough.” (After all, Cuomo's calling for an external investigation into the sexual harassment allegations did not prevent his ouster.)

“This leaves the question open to 'who are these outside experts,' and you can’t anticipate every situation that might arise. Hochul and her husband probably have the best intentions to keep everything separate, but the optics of this are not good,” Gross points out. “As hard as it may be, Hochul’s husband should consider resigning from his job. Just imagine if he quit — that would go a long way in quashing bad stories. Now imagine if he stays — they will be combatting negative press and answering inquiries for the entirety of her administration.”

Like Gross, Grabowski sees Hochul’s husband’s business affairs as a red flag for her early days in the Governor’s seat that should be dealt with swiftly. “Her true test will come when an apparent conflict of interest arises from her husband William’s business dealings or some other scandal in Albany touches her administration,” he predicts.

Hochul’s challenge is one not unfamiliar to many communicators: signaling what kind of leader she will be following a rocky executive transition. From former Uber CEO Travis Kalanick’s ouster following sexual harassment allegations at the company, to the fall of Hearst’s Troy Young last year, communicators have increasingly been tasked with restoring public confidence in the organization in question while painting the incoming executive in a positive light.

Helen Shelton, global chief diversity officer at FINN Partners, says that in transitions such as these, “Demonstrating the executive's credibility, knowledge and expertise is the top priority.” She adds that “creating opportunities that can lead to tangible, positive results” should be at the top of the list (no doubt Buffalonians appreciated Hochul’s county fair appearance, framing her as hometown hero).

Gross argues that culture change must be at the heart of Hochul’s communication strategy. In terms of changing workplace culture, Hochul must demonstrate that “harassment, bullying and any other form of repugnant behavior will not be tolerated.” And while she’s done a good job of hitting that talking point so far, Hochul should also communicate the steps she’s taking to shift culture internally, such as sexual harassment training, anti-racist training and improved internal communication, Gross says.

Secondly, Gross says listening is key in a transition. “Listen to constituents, listen to staff, listen to legislators,” she advises, urging Hochul not to “make any sudden moves or decisions without listening to the constituents first. Then, announce policies and legislative priorities.”

So, what’s Hochul’s PR prognosis moving forward? Grabowski posits that the news media give Hochul a “longer-than-usual honeymoon period” given the circumstances of Cuomo’s departure, and believes “her grace and eloquence will add even more to her account in the public’s goodwill bank. Her experience as a member of Congress is extremely useful as she navigates the minefield of working with the national news media.” Now it’s up to Hochul–and her communications team—to make the most of a good starting position.