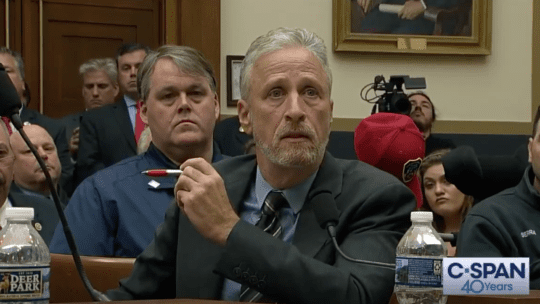 Nearly 18 years after a terrorist attack on America felled the two tallest buildings in New York City and snuffed out thousands of lives, the police, firefighters and medical personnel who fought to restore order and rescue the injured that day are back on the front pages.

But would they be, if not for Jon Stewart?

The former Daily Show host and longtime resident of lower Manhattan left late-night in 2015, but his appearance on C-SPAN yesterday in testimony to a congressional subcommittee was relentlessly on-brand. Stewart has a reputation for speaking truth to power—or at least for speaking to power what he believes is truth—in an impassioned way that pulls no punches and is often self-revealing. This was no exception. Choking up, he slammed Congress for poor attendance at the subcommittee hearing, which he called "shameful," and for failing to prioritize the medical care of the "heroes" who, he said, continue to grow sicker and die from 9/11-related diseases.

[UPDATE: The 9/11 bill passed the House subcommittee hurdle on Wednesday.]

Stewart's natural power as a speaker, and his obvious passion for this cause, catapulted the issue into most national media outlets. It goes to show that even if you have an issue that should, in theory, advocate for itself, having a celebrity carry a message can make the difference between page 22 and A-1.

This is, of course, not a new tactic. There was, for example, Jane Fonda and her protest against the Vietnam War. In more recent years, we've had Leonardo DiCaprio speak out on environmental issues and launch his own foundation, Angelina Jolie work for humanitarian causes, and Duchess of Sussex Meghan Markle promote feminist causes, among many others. The entire #MeToo movement began with an activist named Tarana Burke, but it was a tweet by actress Alyssa Milano that made that the hashtag heard around the world.

If you’ve been sexually harassed or assaulted write ‘me too’ as a reply to this tweet. pic.twitter.com/k2oeCiUf9n

But a celebrity face and voice isn't a guarantee that your message will be received, or received well. Even having onboard a powerhouse like Beyonce can backfire: the singer joined Michelle Obama's anti-obesity campaign in 2011—and then the next year was shilling Pepsi in youth-targeted advertisements. This kind of hypocrisy in a spokesperson can cast shadows long enough to obscure an organization's entire mission.

Here are some questions to keep in mind if you're thinking you need a celebrity to get people to stand up and take notice:

Is it an authentic and natural fit? Few are the times that a Kardashian has been associated with the words "authentic" and "natural." But eldest sister Kourtney Kardashian found her proper cause célèbre last year when she testified before Congress for safer regulations and stricter rules on additives for makeup. Cosmetics + Kardashian = success. She was successful in working with lawmakers to get a bill introduced.

A celebrity activist endorser should have a natural connection to, and passion for, a cause. It should be difficult to tell— such as in the case of Jon Stewart's work for the 9/11 first responders—if there is compensation involved or if it is just a celebrity's passion project.

Would your cause be better boosted by a micro-influencer? Not every mission is a good fit for a famous face. The overall trend toward micro-influencers in marketing speaks to American audiences' desire for a more relatable product or issue experience. You may find that, depending on the issue, the results you can get from using micro-influencers to target specific demographic segments may far surpass the ROI you'd find working with an expensive household name. And in the case of science-focused causes, remember than an expert might be a better choice.

Are you prepared for blowback if your spokesperson makes a public mistake or does something that doesn't align with your brand values? Celebrities are people too, but unlike most people, they are often held to higher standards for behavior and are more closely scrutinized. Your do-gooder on Monday could, through a tone-deaf tweet or other major judgment error, be a societal pariah by Friday. Is your cause or brand prepared to manage a crisis served up by a spokesperson? Roseanne Bar, for example, is a longtime cannabis legalization advocate (though it seems people still like pot).

The bottom line is: Bigger isn't always better. A celebrity's following, along with the right measures of passion and personal accountability, can be a huge boon for a worthwhile cause. In other cases, it could prove to be a liability. In weighing your options, keep in mind: Jon Stewart probably isn't available.