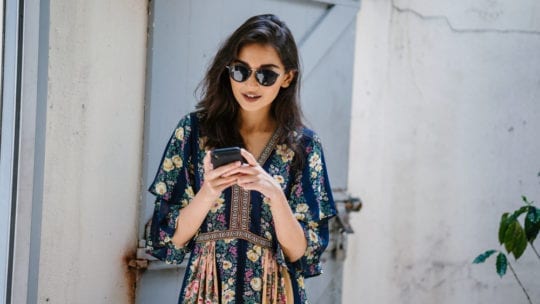 On Tuesday, Dec. 18, The Atlantic published a story that pulls back the veil on something that avid Instagram users have long suspected—many influencers are creating fake sponsored posts. Through a series of interviews with aspiring influencers, the story explains that pretending their posts are sponsored is the best move for many fledgling influencers hoping to make a career out of endorsements on the gram.

After archiving their old photos, developing a fresh aesthetic and exponentially growing their follower base, an aspiring influencer still must have something to show when they begin to approach brands. "But the hardest deal to land is your first," writes author Taylor Lorenz. "[C]ompanies want to see your promotional abilities and past campaign work. So many [influencers] have adopted a new strategy: Fake it until you make it."

The story goes on to explain that influencers equate sponsor numbers with credibility, whether the sponsorship deals or real or not. Moreover, while the FTC has laws requiring influencers to clearly label promotional posts as "sponsored content", there are no laws protecting brands from users who pretend to be evangelizing their products as legitimate influencers.

Brands are still learning how to assess positives and risks when working with influencers. In light of this report, however, new questions emerge: how do brands protect themselves by properly vetting influencers, and what do they do when someone is falsely posing as a legitimate brand influencer?

Allison Fitzpatrick, a partner at Davis and Gilbert LLP, Attorneys at Law, specializes in providing counsel on new media issues from social media to blogging to influencers. She says that, though it's on brands to conduct due diligence when vetting influencers, it's not always practical given a brand's limited resources, particularly in instances of a limited-term sponsorship.

Brands can also step up their social monitoring to scan for unauthorized use of their marks more closely on influencer accounts, she says, and stop any false associations with the brand by sending the influencer a cease and desist letter.  "This does not mean that a brand must send a cease and desist letter each time an influencer tags them in their post," she explains, "but rather in instances where the influencer tries to promote his or her content as sponsored by the brand, when that is not the case.  More policing of this practice should lead to greater honesty and transparency in the entire industry."

All in all, Fitzpatrick says, this trend should serve as a reminder that not all publicity is good publicity, after all. She points to Volvo, a brand that became attached to controversial YouTube star PewDiePie after he  claimed to sponsor its video, when he did not. (Most brands wanted to sever ties with the YouTube star after his controversial, anti-semitic comments.) To make matters worse, once confronted about the false sponsorship, he swapped out Volvo for Saab as a named sponsor.

"In the end," Fitzpatrick said, "this fraudulent activity hurts the entire influencer industry. It may result in certain brands investing  less money in influencer marketing and consumers paying less attention to influencers."