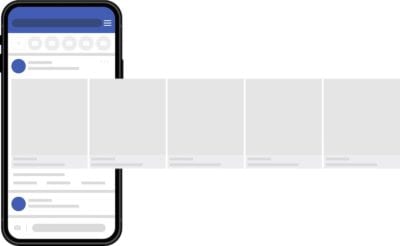 Comments and likes don't pay the bills. If they are all your Facebook ads are generating, it's probably time for a change of approach. In order to tie your Facebook ads to business results, you must design captivating ads that get your prospects to stop mid-scroll. It's not enough to understand the technical side of how to set ads up—a strategy for getting Facebook users to stop scrolling is crucial.

Stop the Scroll: ICE Them!

Most ads don't do a good job of scroll-stopping:

The person running this ad posted it in an industry Facebook group. She was frustrated; her ads weren't working and she couldn't figure out why.

The problem was that people were scrolling past the ad. Most brands run ads like this. They're salesy, unoriginal, and easy to ignore. If your ad isn't original, your prospects are going to skip right over it. The very first job of the ad is to get them to stop scrolling. How do you do that? You ICE them.

If you want to stop the scroll, use an image that makes users think, "Ooh, what was that?" A feed-disrupting image almost tricks users into thinking it's not an ad. (No one wants an ad.) 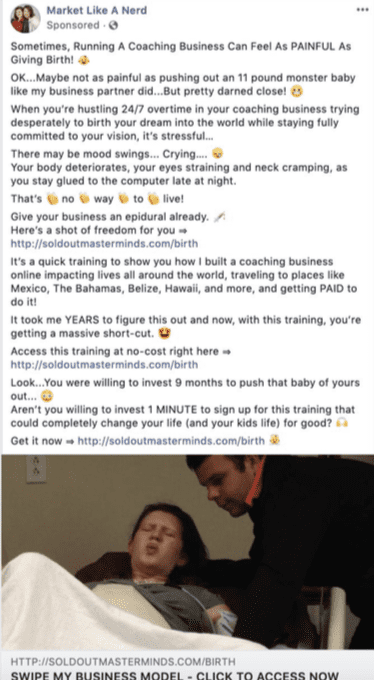 This ad worked well. I'm in labor in this photo; it looks just like a regular post in a newsfeed. It's not obvious that I'm trying to pitch something, and it captures attention.

Animals are also great at stopping the scroll. Here's a picture of me holding a sloth: 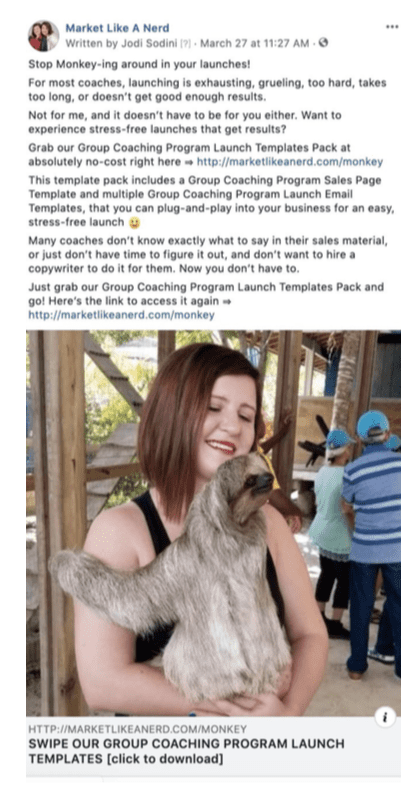 Some marketers assume that they need a designer in order to craft pretty, branded images. All I did was search my personal profile for images that I thought would be disruptive, repurposing them as ads. I wrote hooks based on images I thought would capture attention.

The second thing to consider is contrasting colors. Facebook is blue—that's their brand. What is the opposite of blue? Yellow. If you see yellow in a newsfeed, it stands out: 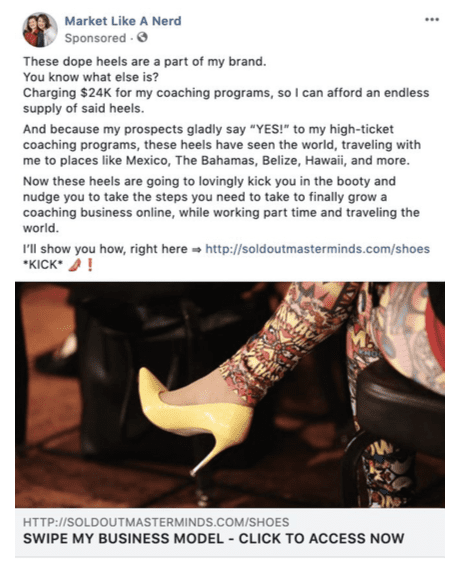 In this image, I was sitting in the audience at a conference before I went on stage to speak. Someone took a photo of my heels. I used them in a controversial ad about my heels being part of my brand. In the copy, I wrote about charging $24,000 for my coaching program so that I could afford an endless supply of heels.

In the comments section, people were going crazy about whether they liked my heels and how they felt about me spending money on shoes. It’s good to create controversy in your ads. Unless you're publishing fake news or hate speech (don't!), Facebook's algorithm does not differentiate between positive and negative sentiment; the point is to get viewers talking.

Hook viewers with the first line of your copy. Sometimes I'll call out in all caps the exact person I want to read the ad: "ATTENTION ONLINE COACHES." Or, take an unexpected angle: "Do NOT Grow Your Business." Why on earth would you tell me not to grow my business? That doesn't make any sense. It's controversial, surprising and intriguing.

In this case, I used an emoji before the hook as opposed to all caps: 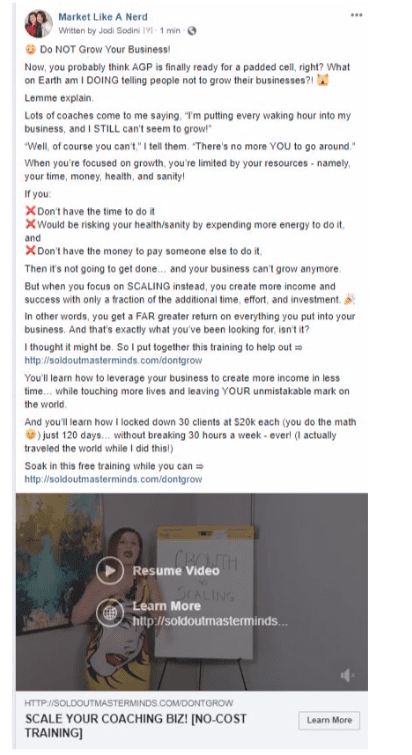 I put a lot of thought into that first line. If you're testing copy, try changing the first line and keeping the rest of the copy the same. The first line captures attention and gets people to keep reading. If you want to stand out in the newsfeed, don't do what everyone else is doing—a corny ad with a standard pitch and headshot won't cut it.

To be continued. Keep an eye on What's Shakin' for Part 2, in which Amanda will lay out how to get those scroll-stoppers to click your ads once you've grabbed their attention. (Learn more about Market Like a Nerd here.)