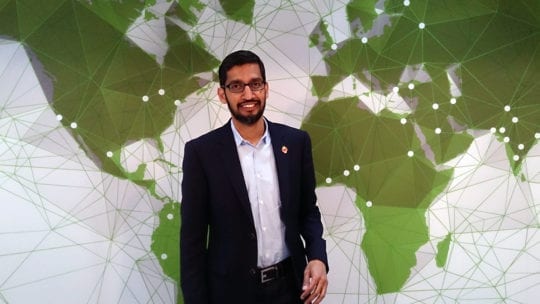 The hearing focused on several partisan issues of concern to Democrats and Republicans alike. Committee members sought to investigate whether or not Google's algorithm is politically biased against conservative viewpoints, dug into Google's plans to launch a censored and surveillance-ready search engine in China, assessed Russian (and Iranian) election interference through YouTube, as well as the impacts of two Google+ data breaches and more.

“A free world depends on a free internet," House Majority Leader Kevin McCarthy said in his opening remarks. "We need to know that Google is part of a free world.”

In days to come, Pichai's remarks will likely be compared to Mark Zuckerberg's grilling by politicians last fall. Pichai smiled and looked genuinely human, in contrast to Zuckerberg's awkward, stilted testimony in September. Moreover, Pichai was artful in response to Congress' many pointed questions, deploying tactics that helped his brand emerge from the chaos looking measured and thoughtful.

A diplomatic opening that addressed all major stakeholders

Pichai rose to a challenge specific to this hearing—defending Google's practices while acknowledging that certain things need to change. He accomplished this by using a communications strategy that employees at other big tech brands, like Apple, have long demonstrated in their customer service: Acknowledge, align, assure. You acknowledge the concerns that your customers have, align with those concerns, and assure them that you're working on resolving it soon.

“I lead this company without political bias and work to ensure that our products continue to operate that way,” he said. “To do otherwise would be against our core principles and our business interests.” This line acted as a salve to both end users of Google's products and services and its internal stakeholders all at once.

The messaging that a brand deploys during crises should be tailored just enough to speak the various languages of different stakeholders, but not so much that the messages themselves are wholly different. Pichai's opening remarks demonstrated a thorough understanding of this, and moreover, a mindfulness for the many different concerned parties.

One of the most memorable moments from Mark Zuckerberg's and Jack Dorsey's testimony in September came when Zuckerberg was asked how the platform made money. He replied with a glib answer—"we sell ads"—and a smirk that spoke volumes about the generational disconnect in the room.

By contrast, when Rep. Zoe Lofgren this Tuesday asked why a Google image search of "idiot" populated a majority of images featuring Donald Trump, Picahi calmly went into an explanation around how keywords and search algorithms generate search results, explaining that there is not one lone factor.

Similarly, when Rep. Lamar Smith cited studies that found algorithmic bias against Google search, Pichai calmly pushed back on the methodology and sample size of those studies, reminding the senator that Google publishes rater guidelines publicly and explaining that “it’s not possible for an individual employee to manipulate our search results…we have a robust framework.”

By staying calm and resisting the opportunity to condescend, Pichai not only looked measured and intelligent, but also managed to educate the committee—and the general public—on how Google's internal processes actually work.

We've seen this time and again with brands like Equifax and Ticketmaster: The best way to demonstrate you've learned from a crisis is to play the role of educator. Products like Google's Launchpad incubator have always been educational tools, but are known only to those with the time and/or resources to opt in.

By sharing how Google works with more of the general public, Pichai showed that Google is capable of uniting people as much as it currently divides them—something that both crowds gathered outside the Capitol can agree is sorely needed.