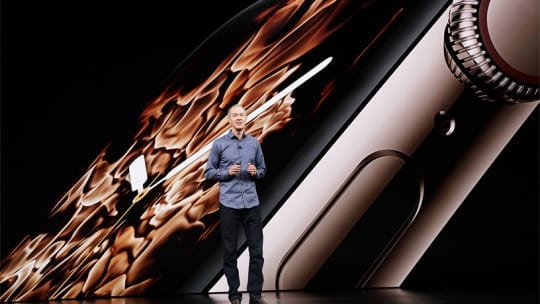 Last week's "Gather Round" Apple event was met with expected fanfare from tech bloggers and industry wonks alike. The keynote, Apple's first to be held in its brand new Steve Jobs theater on the Apple Park campus, included the announcements of several new iPhones, some software announcements, and the reveal of its newest line of wearables with the Apple Watch Series 4.

While there was much to nerd out over about the iPhones (adjustable depth of fields, price points nearly equal to those of a MacBook,) the Apple Watch Series 4 received the most praise and attention. Apple's new line of watches can sense your heart's electrical pulses and monitor for atrial fibrillation, a condition that's not only the most common cause of heart arrhythmia in the U.S., but the most common cause of embolic stroke, too. Apple shared the new device's endorsement by the FDA on a dedicated keynote slide, and even invited the president of the American Heart Association onstage.

“It won’t catch every instance of [atrial fibrillation], but we believe this is going to help a lot of people who didn’t otherwise know they had an issue,” Apple COO Jeff Williams said onstage at the event.

While the announcement of this feature prompted many previous naysayers of wearable tech to tweet that they would be making the Series 4 their first smartwatch purchase, others raised concerns about what this new feature means for both the tech and medical industries. At $400 for the most basic iteration of the Apple Watch, this potentially life-saving device is only realistically attainable for those with the disposable income to support such a purchase—and that model doesn't even include the cellular connectivity that the watch's other features will require (like the ability to sense when the wearer has fallen and send for help.)

To this end, a good endorsement from the FDA could actually turn out to be bad PR for Apple, a company known to offer its newest proprietary tech at premium prices, as people who need the tech might not be able to afford it. The issue of life-saving resources that are unaffordable to many also recalls several recent instances when pharmaceutical companies have made headlines for raising the price of their medications to such exorbitant numbers that those without insurance deemed the gouging to be a death sentence.

Moreover, a recent story in The Atlantic warns of the additional costliness of misdiagnosis. The piece recalls when a company called AliveCor released a heart-monitoring Apple watchband, and the medical community expressed concerns that the medical system is not yet efficient enough to make efficient use of evolving wearable tech.

“At least in the U.S., the upcoming watch-driven explosion of AF diagnoses will happen in a fee-for-service environment that pays doctors and hospitals to test and treat,” cardiac electrophysiologist John Mandrola wrote in the trade publication Medscape. He added that misdiagnosis by smartwatch would both prompt an unnecessary doctor's visit and and potentialyl unnecessary (and costly) treatment.

Dave Gershgorn, a tech and A.I. reporter at Quartz, recently wrote that this FDA-cleared electrocardiogram (ECG), which is built into the device, "can get hospital-grade heart monitoring in 30 seconds, with the ability to track that heart health over time and export the data as a PDF to share with their doctor. But the FDA clearance comes with some caveats—it’s not intended for use by people under 22, or people who have already been diagnosed with certain heart conditions, according to FDA documents."

Gershgorn also tells PR News that the FDA's endorsement isn't as full-throated as it sounds.

"The FDA cleared the device, which is different from an approval, because it’s classified as a low- to moderate-risk medical device," Gershgorn says. "Not to necessarily replace other electrocardiograms or echocardiograms. There have been lots of anecdotal examples of the Apple Watch catching high or irregular heart rates, so it makes sense that Apple would try to turn that into a functionality of the Watch."

From a profit perspective it makes sense, too, he wrote: positioning the Apple Watch as a healthcare device is "a huge shift that allows Apple to turn some of the $500 billion enterprise medical device industry into consumer dollars."

Gershgorn understands concerns over the fact that the price of the new Apple Watch means this life-saving tech will only be available to those who can afford it, but stresses that the device is not a perfect solution to begin with.

"That’s totally a concern, and one worth tracking," says Gershgorn. "But on the other hand, this [tech] didn’t exist last week, and it’s not a panacea for heart conditions. It’ll be interesting to see how the commoditization of the technology plays out—now that Apple has done it there will be tons of copycats vying for the same FDA clearance at a lower price point."