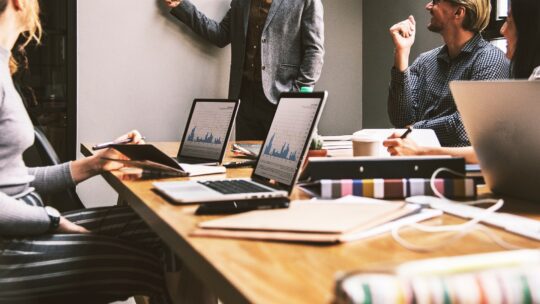 Survey data can help disprove long-held assumptions. For example, measurement guru Katie Paine, CEO, Paine Publishing, recalls a company she worked with that believed its superior customer service was a differentiator. The company was confident survey data would show customers agreed. Paine urged a survey regardless.

“It turned out survey respondents said the company’s customer service was weak,” she says.

Likewise, a survey of 120 communicators we conducted in late Oct. through early Nov. included surprising data as well as things we thought were true before the poll was conducted.

Flexible Hours and WFH are Royalty 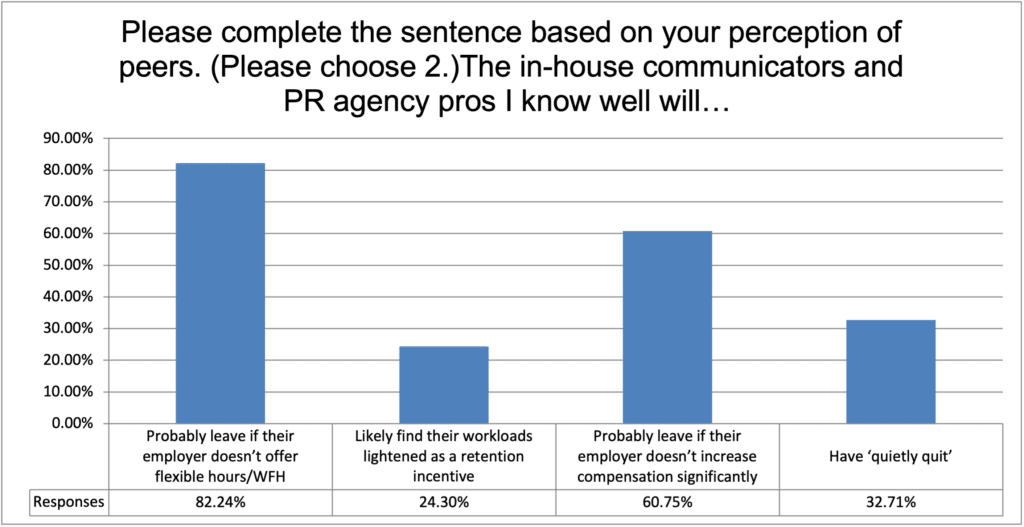 Eaton adds that communicators who graduated recently and were hired during the pandemic haven’t worked in the office. On top of that, “they often finished school virtually…so they enter the work world with the expectation of that same kind of flexibility.”

Hybrid Work for All

On the other hand, older communicators also are comfortable with non-standard work arrangements, including hybrid work and flex time. They may bristle at a return of strict M-F, 9-5 office regimes. Adds Meghan Powers, a VP who leads The Bliss Group's workplace specialty group, PR pros “found that previously accepted norms–like crowded daily commutes to the office–are no longer necessary to get the job done.”

Though companies in some sectors are demanding a return to the office, others are carefully leaning in that direction. It’s unclear where PR will fall on the scale eventually. Also unclear is how/if recession and the plight of cities might change things.

However, communicators seem similar to workers in other sectors, who, if pressed, prefer flexible hours over WFH options. In fact, as you'll see below, PR pros think some amount of in-office work is vital for success.

While PR pros value flexibility, they seem copasetic with spending at least some time in the office. Indeed, our survey shows nearly 60% of respondents have office-attendance requirements (see Chart 2). 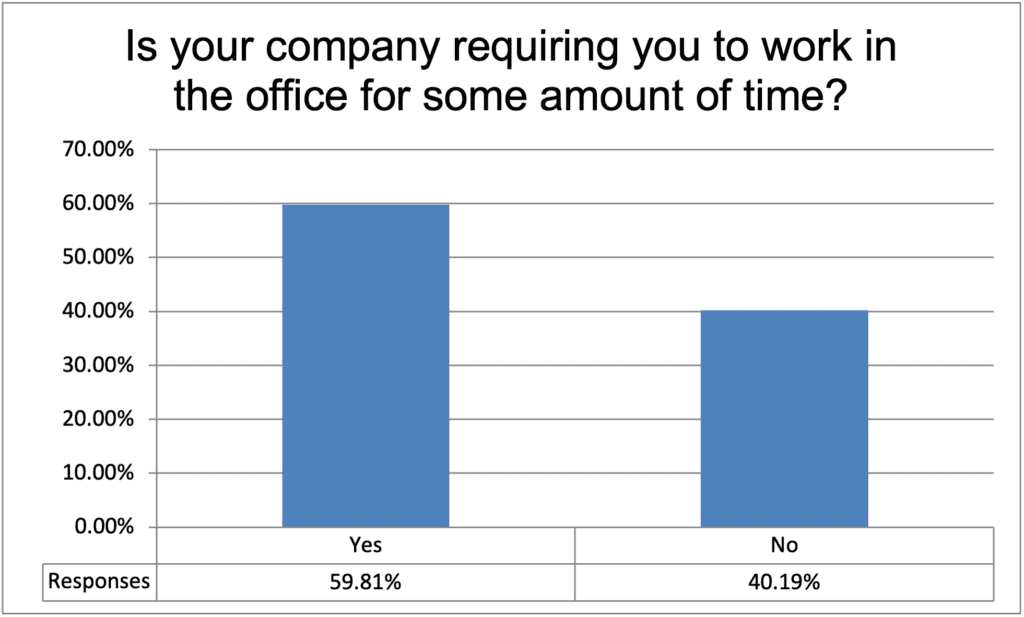 The 59-41 split contrasts somewhat with 2021 survey data, when the split was 50-50. Eaton anticipates a trend where more communication managers will require staff to report to spend some time in the office. The 40% figure “remains only because employers still are battling the Great Resignation. It will decline eventually,” Eaton says.

Incidentally, the 59-41 split was the sole significant difference between the 2022 and 2021 data.

In keeping with the data in Chart 2, most PR pros we spoke with said they and their colleagues are required to work in the office for a portion of the week or month. Prior to the pandemic, at least one of the sources we interviewed said her firm did not offer hybrid work before the pandemic.

Things are different now. For example, at Eaton’s employer, Red Lorry Yellow Lorry, there’s a designated day each week where staff converges on the firm's offices. Moreover, leaders schedule group activities, including team-building, training and brainstorming on the designated day, she says.

Prompting collaboration is one of the keys for in-house requirements, these sources said. Indeed, collaboration is so important at Red Lorry Yellow Lorry that when an employee is unable to report on the designated ‘team’ day, she can pick another day, but is encouraged to coordinate with other staff, who also will report that day. “Having an employee alone in the office isn’t good for anybody,” Eaton says.

Fortunately, the consensus of those we spoke with is that office attendance is not only tolerated, it’s requested and beneficial.

For example, Forrest says older and younger communicators at her firm “crave” in-person collaboration. Moreover, staff with fewer than 5 years’ experience are “specifically requesting in-person office time…this allows them to ask questions, learn from others and develop stronger interpersonal relationships.”

“And it’s the ability “to ask a question of colleague, which prompts spontaneous creativity. They can say, ‘I've got this problem, let's workshop it.’ You just don't do that as much on Zoom.”

As a result, Eaton believe in-office time will propel a young communicator’s career “quicker.” In addition, having staff in the office helps maintain “culture,” she says.

Like Forrest, Powers uses the word “crave” when describing her colleagues’ desire for in-person office time. What’s more, Powers says the PR sector now values those with “the ability to collaborate…and are able to work from home.”

Returning to Chart 1, in what seems a slightly less-obvious data point is that 60% believe “a significant” pay increase/bonus is a vital incentive for continued employment. Eaton isn’t surprised, yet she anticipates some “level-setting.”

Once the employment bubble bursts, she anticipates communicators who’ve obtained higher salaries or promotions may find themselves “in golden handcuffs…unable to make another move upward or even a lateral move.” In short, she thinks larger salaries as employment incentive “aren’t sustainable.”

On top of that, not quite one-third believe colleagues have quietly quit. Perhaps the largest surprise: only 24% anticipate a lighter workload as an incentive.

Responses in Chart 3 augment these data. Again, flexible hours (44%) and “multiple times per week” of WFH (35%) vie with increased pay/bonuses (53%) as top incentives for our respondents.

In addition, note the strong showing for “purpose” (34%) as an important element of job satisfaction.