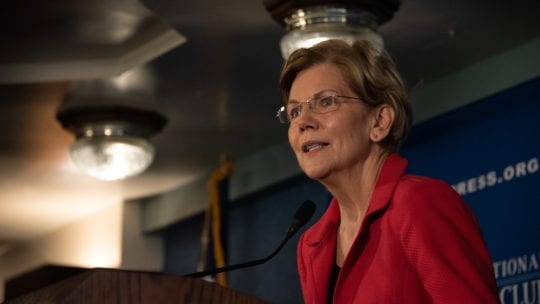 Massachusetts Senator Elizabeth Warren has long spoken proudly of her Native American ancestry, evoking it in public appearances and stump speeches. The democratic senator's claims have long been refuted and mocked by the right though, and President Trump especially, who frequently and sarcastically refers to her as "Pocahontas" and once even offered to pay Senator Warren one million dollars if she could prove her claims of Native heritage.

Senator Warren did just that this week, publicly announcing the results of a DNA test that found  “strong evidence’’ she had a Native American in her family tree going back 6 to 10 generations. Warren's website went even deeper into her background, and the tactics used to turn her heritage into political fodder by the right, while addressing claims that she got where she is as a hard worker and not a diversity hire.

"The people who recruited Elizabeth to her teaching jobs, including Ronald Reagan’s former Solicitor General, all confirm: they hired her because she was an award-winning legal scholar and professor and they were unaware of her family’s heritage," reads the website.

On the surface, this effort to give Senator Warren's claims factual support seemed like an artfully executed campaign. Later that day, though, it became clear that the DNA test had done more harm than good—while Trump resumed calling her 'Pocahontas' and denied ever saying he would donate the money if she could prove it (see that statement in the video below), the Native American community took issue with what it perceived to be Senator Warren appropriating her identification for political gain.

Thus, Senator Warren's gaffe amounts to lessons learned for communicators about timing, why mixing heritage into your outreach strategies can be a dangerous game, and how to take cultural stand without angering any constituency of people.

Timing is (still) everything

Senator Warren's camp did a disservice to the results by releasing them on a Monday, especially in today's ever-distracting news cycle. There will no doubt be a tumult of news coming out this week with wider impact and larger consequences. It's only Tuesday, and so far we've also learned that Facebook's role in the Myanmar genocide went all the way up to the government itself, that Saudi Arabia has altered its story on the death of journalist Jamal Khashoggi and that Microsoft co-founder Paul Allen has died.

From a communications perspective, Senator Warren's timing couldn't have been worse. A good rule of thumb to follow with big announcements is similar to when you're sending out emails—avoid Mondays and Fridays. On Mondays, there's a whole week's worth of other information out there competing for short attention spans and speedy media consumption diets, while on Fridays, people are checked out (and journalists are often unable to follow up or cover your story).

The DNA results also greatly frustrated members of the Native American community across tribes, especially The Cherokee Nation. "A DNA test is useless to determine tribal citizenship," Cherokee Nation Secretary of State Chuck Hoskin Jr.said in a statement. "Current DNA tests do not even distinguish whether a person's ancestors were indigenous to North or South America."

"Using a DNA test to lay claim to any connection to the Cherokee Nation or any tribal nation, even vaguely, is inappropriate and wrong." Hoskin continued. "It makes a mockery out of DNA tests and its legitimate uses while also dishonoring legitimate tribal governments and their citizens, whose ancestors are well documented and whose heritage is proven."

Kim TallBear, an associate professor for Native American studies at the University of Alberta, added that using the DNA test as a political tool undercuts tribal sovereignty, in a statement below. She also noted that Warren continued to stand by this claim despite "her historical record of refusing to meet with Cherokee Nation community members who challenge her claims."

after too many media inquiries, here is my statement on the #ElizabethWarren DNA testing story. pic.twitter.com/cqD8PQqI0N

Communicators ought to take note that The Cherokee Nation's negative feelings around Warren's DNA test all center around the fact that she wasn't inclusive—between allegedly refusing to meet with members of the community and presenting her findings as a blunt rebuttal to Trump, Senator Warren didn't exercise much tact or sensitivity in this process. Though the test results would have been inherently self-serving, Warren did herself a disservice by not folding The Cherokee Nation into the discussion. What could have been an educational and thoughtful discussion about what constitutes the right to claim heritage has instead become a lesson that Senator Warren is forced to learn out in public.

By not folding tribal perspectives into her initial revelation, Senator Warren also lost an opportunity to extend the breadth of conversation around her results into the ever-churning news cycle. A positive lesson about claims to native heritage would have been a massive evergreen story, one that could have positioned Senator Warren as someone simultaneously bringing awareness to her heritage while also acting as a model of sensitivity and decency toward an incredibly diverse swath of native cultures.

Hopping on a cultural or ideological bandwagon is always risky, but unlike the wildly successful Kaepernick Nike campaign, this risk wasn't calculated, and didn't allow any marginalized voices to speak for themselves. Without those calculations, even a well-intentioned communications effort can come off as opportunistic, appropriative and insincere.