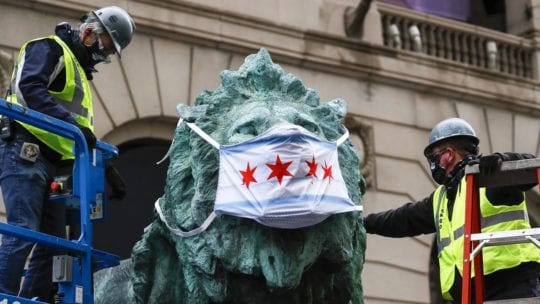 In addressing one of the biggest threats to their livelihood in modern history, organizations worldwide have had to make major shifts in their business models, workforces and PR strategy. Some companies have risen to the challenge, while others have faltered, unable or unready to withstand such a major disruption.

Experienced communicators and marketers have built on years of creative and strategic thinking to put their organizations on the map during times of crisis. With empathy and apt analysis of public needs—feeding frontline workers, crafting home offices, offering children’s entertainment—these fast thinkers have ideated and executed some of the boldest PR and marketing campaigns in recent memory.

Some organizations have taken a riskier approach, building digital or earned media campaigns that stand in for the usual awareness-building events—in-person rallies, press conferences or protests—now limited by bans on public gatherings. This can require some courage, given discussions around mask-wearing and reopening have become increasingly polarized.

Two notable examples of brand activism have stood out over the course of the pandemic; one local, one national: a mask-wearing campaign in Chicago, and political statements from longtime mercantile activist Patagonia.

On April 30, to raise awareness of a statewide mandate to wear masks in public, the Art Institute of Chicago placed oversized masks on the lion statues that stand guard at its entrance. A nearby Picasso statue was masked as well.

“When Mayor Lightfoot chose our lions as part of her continuing campaign to keep Chicagoans healthy and safe, our team worked with our conservation and facilities teams to ensure that we could add the masks safely—they are works of art—and we ran with it,” shared Kati Murphy, executive director of external affairs at the Institute.

The messaging effort was both timely and heartfelt. “We coordinated installation to coincide with Illinois requiring facial coverings in public, and the lions served as a symbol of unity for the city, reminding people that we are all in this together,” Murphy said.

The Art Institute unfurled the masks, which bore the Chicago flag, in tandem with a mandatory mask-wearing announcement from the Chicago Mayor’s Office. Photos circulating on social media and in the news acted as a straightforward public service announcement, while giving Chicagoans reason to smile in troubled times. The lions carry a legacy of Chicago pride, having sported Cubs caps in 2016 after the team’s World Series win and Bears helmets twice before the team's two Super Bowl appearances.

One lion’s mask was stolen within 24 hours after installation, but was quickly replaced with more sturdy ties. A Twitter post from the museum struck a triumphant, yet wry tone with the hashtag #DontStealMasks.

If anything, the act of vandalism (and subsequent failed attempt) only strengthened the Institute’s gesture. “Naturally, we were disappointed when the North Lion’s mask was stolen, but that moment only built additional enthusiasm around our partnership with the Mayor’s office,” said Murphy.

Our lions show their love for the city, encouraging Chicagoans to take the necessary steps to protect each other.

We're proud to be a part of the Mayor’s campaign to keep residents healthy and safe. #StayHomeSaveLives #OneMaskAlreadyStolen #NewMaskArrivesToday #DontStealMasks pic.twitter.com/X8MK4n28FQ

The communications team at the Institute ran a strong local earned media effort, with the lion statues appearing on NBC, ABC and CBC affiliates and in the Chicago Sun-Times, Chicago Tribune and others. To allay criticism around wasting in-demand mask materials, the Institute prepped a statement noting that materials used did not impact those needed to produce PPE supplies for first responders and frontline workers.

Dimension Design, a company that specializes in fabrication for expos and in-person events (currently on pause), also landed a media spotlight for the firm, which has sewed thousands of masks for frontline workers. It’s a prime example of a brand doing good to keep their company in the forefront until in-person events—the cornerstone of their business—return.

Outdoor retailer Patagonia has long been known for its activist bent, and its status as a private benefit corporation has given it more leeway than most to focus on social good initiatives over profits.

Patagonia CEO Rose Marcario, who has seen the company’s profits triple since 2008, has penned left-leaning articles on LinkedIn going back to 2015. As a leader at the helm of an outdoor apparel and supplies brand, her thought leadership pieces overwhelmingly focus on the environment, but have more recently spanned social justice issues including voting and labor rights. Marcario has not shied away from criticizing President Trump, particularly on his administration’s environmental regulation rollbacks.

Patagonia’s messaging is centered on a “practice what we preach” methodology. For instance, as the pandemic accelerated in March, the company acted early to shutter its stores while keeping employees on payroll.

As a LinkedInfluencer (and one of the first execs to get on board LinkedIn’s thought leadership effort), Marcario sees wide readership in the corporate social media space. Her latest post argues that the pandemic’s widespread devastation in the U.S., as compared to other countries, is a symptom of a lack of a social safety net. Leaning into child care specifically, she points to a recent Senate bill spearheaded by erstwhile presidential hopeful Senator Elizabeth Warren. The post directs readers to a press page entirely devoted to letters the company has sent national politicians on issues from environmental protection to mail-in voting.

A joint letter from the Outdoor Industry Association, of which Patagonia is a part, tops the press page, prevailing upon congressional leaders to support the outdoor recreation economy by prioritizing reduction of carbon emissions, funding outdoor recreation in low-income communities and building environmentally friendly transportation infrastructure. Despite Patagonia’s occasional black sheep status in the retail industry, the letter, signed by nearly 100 business owners and nonprofit leaders, is a key example of a brand whose messaging finds the balance between industry leader and activist entity.