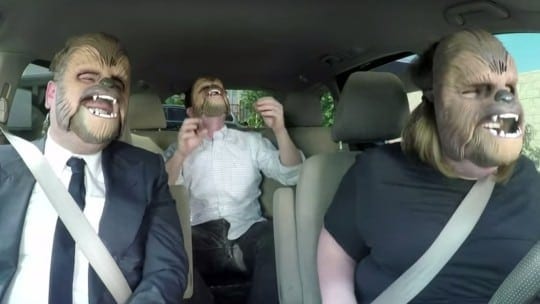 By now, there is hardly anyone in the United States who hasn’t seen or heard about the laughing “Chewbacca Mom.” With more than 156 million views on Facebook at the time of publication (and millions more to come), the video of a Texas mom trying on a Chewbacca mask in her car and laughing hysterically has taken the internet by storm.

Soon after becoming the most-watched Facebook Live video of all time, the story spilled into traditional media. Candace Payne, the woman behind the Chewbacca mask, made news headlines across the world and appeared on Good Morning America, NPR and The Late Late Show with James Corden.

Big brands, such as Kohl’s, Hasbro and The Walt Disney Company immediately rushed to tie themselves to the viral sensation. A representative from Kohl’s, the retail chain where Payne bought her Chewbacca mask, met with the 37-year-old mother of two and gave her free Star Wars toys and $2,500 worth of store gift cards.

All in all, the viral “Chewbacca Mom” story has once again demonstrated the tremendous power of online video content. It has also reaffirmed one of the golden rules of brand marketing and PR: People like to see other people when they are happy.

For another case in point, see the video released in late 2015 by Coca-Cola featuring a man laughing uproariously and contagiously on a subway train, prompting his fellow passengers to also laugh and smile. That “Laughter Mob” video was part of the “Choose Happiness” campaign rolled out by the beverage behemoth in Belgium.

When devising PR plans and considering clever ways to generate brand exposure, marketers can draw a very important lesson from these examples of viral media success:

A story does not need to be complicated to draw people’s attention and win their affection.

These days, big brands invest millions of dollars in elaborate and often highly produced online content and campaigns designed to gather as much attention as possible. Yet the video that broke all the records is a simple recording from the smartphone of a woman sharing her sincere laughter with the world.

So, what does it all mean for your brand, and how can you apply these lessons in your own PR outreach?

Here are the three practical lessons all brands can learn from the “Chewbacca Mom” story:

Securing great brand exposure is not necessarily dependent on huge marketing budgets. The key to achieving success is often establishing an emotional connection with your audience. Campaigns with sincere and heartwarming appeals are much more likely to gain people’s trust and convert them into customers.

A study published in the International Journal of Research in Marketing confirmed that ads evoking positive emotions resonate better with people than snarky or downbeat campaigns. Having analyzed more than 1500 consumer responses to 1100 TV commercials, researchers found that ad-evoked feelings create strong associations with how viewers perceive the advertised brand.

Even if your company operates in an intrinsically negative industry—say, divorce law or life insurance—there are always opportunities to focus on the positives. Rather than clinging to old clichés or inserting cynical twists into your advertising, try to build your campaigns on positive and honest emotions. Doing so will help you foster similar perceptions of your brand.

We live in a very noisy world, and it is difficult to get people to remember much about any particular brand or product. This is why companies need to be very clear on what they want their audiences to know about them. Instead of betting on visually stimulating content, make sure your PR and advertising campaigns reflect the core values of your business and what your brand is really about.

As our lives become increasingly cluttered with myriad companies hawking their products and competing for our attention, we have recently seen powerful examples that simple and positive images often prove to be the most captivating. And in the case of Chewbacca Mom, what resonated with viewers was the unbridled joy that came straight from her heart…via the mouth of a wookiee.

Evan Nierman is founder of Red Banyan Group, a crisis communications and public relations firm with offices in Washington, D.C. and Florida.