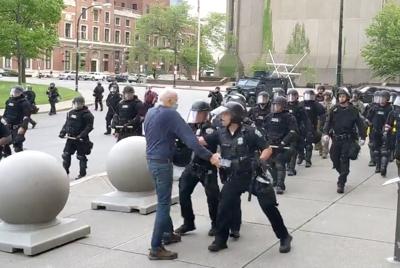 The adage that ‘In the age of social media, everyone with a smartphone is a publisher,’ is on display again. With videos of the shooting of Ahmaud Arbery and George Floyd's killing, a corollary to the above adage might be that 'video makes honest communication mandatory.’ Put another way: What's going on when there's no video?

Video is subject to interpretation. Sometimes. In addition, the danger of doctored footage is becoming known to PR pros. Still, video's rise has highlighted the importance of honest communication. Of course, honesty always was important.

Fresh evidence comes from Buffalo, NY, which, like many cities in the country, is experiencing race-related tension. For PR pros, the story also highlights the question of how long to wait before you issue a statement.

Last night, video footage showed two police officers pushing a 75-year-old man, long-time activist Martin Gugino, to the pavement at Niagara Square. Earlier, the Square was the site of protests in support of Floyd, the unarmed black man who police killed in Minneapolis May 25.

An officer yells, “Get a medic.” The officers look at the prone, bleeding Gugino, but move on. Gugino is in serious condition, media reports say.

Radio station WBFO-FM captured the footage and posted it to social media at 9:13pm, according to the “Democrat & Chronicle.” Reaction on social and from major news organizations was immediate.

Buffalo police inflamed the situation with dishonest communication. The man “tripped & fell,” a police statement said, summarizing the day’s protest activity at the Square (see below).

A BPD spokesperson released this update. Five people were arrested and another person was injured during a protest in Niagara Square tonight. @WKBW pic.twitter.com/UZoDsSRs4J

A bit after 11pm, tumult surrounding the video and the police statement was high. At some point in the evening, two Buffalo police officers were suspended without pay. In addition, the mayor said he ordered an investigation.

This morning, Brown and police captain Jeff Rinaldo attempted to explain the action and the statement. From a PR viewpoint, they made matters worse.

“There [was] no attempt to mislead,” Brown told “A New Morning” radio show, referring to the initial police statement. “We always have to present information with the highest level of transparency and honesty for public trust.”

The first video, Rinaldo said, appears to show “the subject had tripped and fallen while the officers were advancing.” To his credit, Rinaldo admitted the WBFO footage “clearly showed the officer’s arm going out and that he shoved the individual with another officer.”

He added, “I think the department was extremely quick to correct [the statement that] was put out once it was discovered that it was not accurate.”

As far as we know, neither the police nor the mayor has apologized for the incident or the incorrect initial statement.

What really happened? Time will tell. PR pros know this conundrum: Do you issue a statement quickly in a crisis or do you wait to gather more information?

David Rivera, chair of the Common Council's Police Oversight Committee, sounded like a PR pro as he dissected the police statement. “Your first instinct is to represent the interest of the department...[but] they should have waited, they should have looked at the videos…It bring[s] a lack of confidence in the general public when you make a comment like that.”

Adding more tension to the situation, late this afternoon media reports said all 57 Buffalo police officers who are members of the city's emergency response team resigned in protest over the two officers' suspension.

Update, June 6, 2020, 1pm ET: The two officers involved in the incident, Aaron Torgalski and Robert McCabe, were arraigned on second-degree assault charges.  Hundreds of police and fire fighters supported the officers outside a Buffalo court, "Daily Beast" reports. Gugino, the victim, remains in serious but stable condition in a local hospital.

Update, June 9, 2020, 9am ET: The president seemed to support the police in this incident, tweeting perhaps it was "a set up."