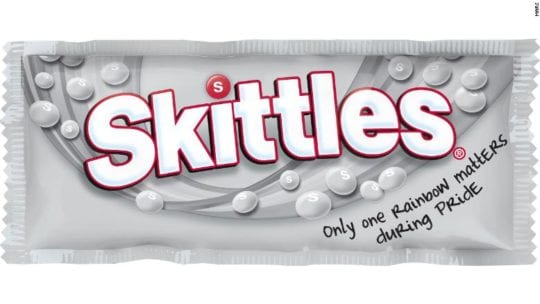 On May 20, Skittles pledged to honor LGBTQ Pride Month by removing the rainbow colors from its signature product. Greyscale candy wrappers read “Only one rainbow matters during pride,” and individual candies will temporarily be leeched of color. Skittles will donate $1 per pack of its all-white Skittles to LGBTQ media advocacy group GLAAD, up to $100,000. The campaign is a revamped version of previous “one rainbow” efforts from previous years, which received mixed reviews.

During PRIDE only #OneRainbow matters. That’s why we have given up our rainbow to show support for the LGBTQ+ community! For every SKITTLES Pride Pack sold we are donating $1 to @glaad.🌈 pic.twitter.com/mecpWaVhzA

The message of LGBTQ solidarity is unquestionably important during a pandemic, as “many LGBTQ+ people will be unable to gather at large Pride events,” per a statement from GLAAD CEO Sarah Kate Ellis. However, given nationwide attention on police brutality and racial inequality, Skittles and other companies that planned rainbow-oriented Pride campaigns in early June risk appearing tone deaf. The promoted campaign hashtag #OneRainbow was trending on Twitter over the weekend; many users were unimpressed by the timing.

Okay, I see what you were going for, and as a member of the lgbtq+ community, I appreciate you. That being said, maybe this isn't the best time to unveil ALL-WHITE Skittles. #OneRainbow

One option Skittles might consider: Hitting the social media kill switch, at least for the moment. Temeka Easter Rice, Sallie Mae’s director of brand engagement, told PRNEWS that having a kill switch should be part of any communications plan. In addition, have representatives of stakeholders weigh in on your organization's crisis plan. Making sure everyone has a seat at the table “saves time and allows you to gather feedback ...before a crisis,” she says.

Justin Buchbinder, social media director at global integrated firm Finn Partners, says that the most important move now is listening. Based on the tone and subject matter of online discussion, “look back over your scheduled posts and campaigns and ask yourself: ‘Is this right, right now?’ If your gut tells you no, hit the pause button.” This content can still be used down the line.

In the meantime, Buchbinder advises organizations that want to send a message of solidarity in the current climate to make a meaningful donation and highlight minority voices.

On the broader question of Pride marketing, Pride-washing, and advantageous marketing writ large, Buchbinder stresses to “make sure that your heart is in the right place. Slapping a rainbow on a product rings hollow and phony.” He advises spotlighting voices of LGBTQ people within your organization, telling their stories.

As we start Pride month we must remember that Pride was birthed out of a riot led by trans women of color. Marsha fought for liberation. We honor her today (and every day ). 🖤 🖼 x @villanaart

Above all else, “make sure that there is meaning behind your marketing. If that core essence is lacking, your plans will backfire and you will surely hear it from those who come upon it,” Buchbinder adds.

For communicators unsure how to make a statement around recent events, writer and business analyst Josh Bernoff, the man behind the "No Bullshit" blog, has you covered. Bernoff wrote a recent article on communications hits and misses around nationwide protests and has offered to provide direct feedback on select inquiries.

Below are organizations communicators can consider donating to and amplifying to contribute meaningfully to the Pride conversation in 2020. They also provide examples of relevant, authentic content at the intersection of LGBTQ issues and racial inequality.