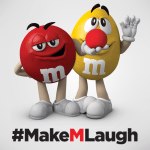 In 2015, M&M’S launched a movement to raise money and awareness for the first-ever U.S. Red Nose Day, a campaign dedicated to raising money for children and young people living in poverty by simply having fun and making people laugh.

In 2016, working with Weber Shandwick, M&M’S sought to #MakeMLaugh again and firmly establish the brand as an important partner of Red Nose Day U.S. through the 30 Days of Laughs Challenge. Each day, M&M’S and their partners issued a challenge on their Twitter page to incite action, laughter and donations from fans. From hugging a tree to balancing a red M&M on their nose, influencers, celebrities and the M&M’S characters prompted fans to #MakeMLaugh.

To launch the 2016 #MakeMLaugh 30 Days of Laughs Challenge, M&M’S partnered with YouTube creator Jon Cozart to create a funny video about the evolution of challenges. The video has received over 570,000 views to date and Jon also issued and participated in multiple challenges throughout the campaign (including opening a bag of M&M’S with no hands).

Not to be outdone, the M&M’S characters joined in the fun by issuing several of the daily challenges, showing off their dance moves and taking a group selfie in red noses. Across M&M’S social channels there was a daily drumbeat of #MakeMLaugh content.

In the past two years, M&M’S has made a total donation of $2,250,000 to the Red Nose Day fund and spurred countless laughs. Media coverage and social media conversations drove a combined reach of nearly 600 million impressions. The #MakeMLaugh hashtag was used nearly 110,000 times over two years, creating equity with the brand and the charitable partnership. Social media content drove nearly 3 million engagements (comments, likes, shares, views) and prompted immeasurable laughs.