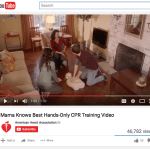 This campaign successfully raised awareness about the lifesaving benefits of hands-only CPR (HOCPR) among Latino millennials. Every year, more than 350,000 people experience an out-of-hospital cardiac arrest in the United States with just a 12% survival rate in 2016.

In 2012, the American Heart Association’s Emergency Cardiovascular Care (ECC) division launched a campaign to raise awareness of Hands-Only CPR (HOCPR) as a lifesaving method and to increase the likelihood of people performing CPR in an emergency. (Hands-Only CPR is CPR without rescue breaths).

In 2016, the partners took the campaign to a new level by targeting Latino millennials with their lifesaving message.

Unfortunately, only about 46% of people who experience a cardiac arrest outside of a hospital get bystander CPR—the immediate help that they need. Latinos in particular are 30% less likely to have CPR performed on them in a cardiac emergency, making them less likely to survive. Performing life-saving CPR can double or even triple a person’s chance of surviving cardiac arrest.

Anthem and AHA used a number of external and internal tactics to raise awareness about the campaign and generate video views for the campaign video, including pitching online editors, webmasters and other online influencers. Outreach efforts included targeting websites related to Latinos and Spanish news; managing an online advertising video campaign that targeted Hispanics from the age of 18 to 35; distributing a national press release in both English and Spanish featuring the embedded video; and introducing a comprehensive suite of online resources, in both English and Spanish, including social and digital media.

Ultimately, diversity communications for reaching Latinos exceeded expectations as 1.1 million completed views were generated from the hands-only CPR training video in Spanglish called “Mama Knows Best,” with each view equivalent to a person being trained as a result of the online advertising program. There were also over 88 million national and local media impressions garnered specifically from the English and Spanish press release distribution, as well as 57.7 million national media impressions secured through media coverage.