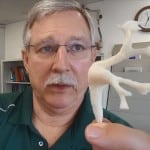 The American Osteopathic Association’s (AOA) media relations team pursues opportunities that build awareness and understanding of Osteopathic Physicians (or DOs, who are fully licensed physicians with the same practice rights as MDs) and the osteopathic philosophy of medicine, which takes a whole person approach to treatment, emphasizing prevention and the body’s natural ability to heal.

In its October 2016 issue, The Journal of the American Osteopathic Association published a study by urologist David D. Wartinger, DO, whose research investigated a model for testing whether specific roller coasters can help people pass kidney stones. The promise of such study would be to provide people an inexpensive noninvasive means to pass small stones before they grow painfully large and require medical intervention. Considering more than 300,000 patients in the United States seek emergency care for kidney stones each year, this presented a perfect opportunity to highlight “the DO difference.”

While it may seem like a pitch with great visuals, an interesting story and useful information would naturally garner wide coverage, there were several challenges the team overcame to make this successful. First, great care went into ensuring the messaging for osteopathic medicine was inextricably integrated into a story that doesn't connect to osteopathic medicine in an obvious way. Equally important, the team maintained fidelity to the study's true findings—which were fairly complex—avoiding oversimplification and sensationalism for an easier sell.

In addition, several obstacles had to be negotiated throughout the development of the release: Dr. Wartinger is a professor at Michigan State University, which also had a claim to the study. The AOA and MSU teams collaborated extensively to ensure the story was a win for both sides.

In all, more than 850 broadcast, print and online outlets covered the story with the osteopathic perspective—including The New York Times, CNN, NBC’s Today, BBC News, CBS Radio and Popular Science. Coverage of the press release accounted for nearly 20% of the AOA’s 2016 media placements, generating more than 40 Tier 1 stories that included osteopathic messaging.