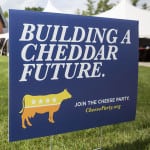 Bold graphics and tongue-in-cheek campaign slogans (playing on those used by leading presidential candidates) gave the Cheese Party’s design a unique spin on traditional political campaigns. Diverse marketing tools—ranging from a dedicated website, to campaign T-shirts, buttons and bumper stickers, to video ads—allowed the Cheese Party to reach a wide audience of consumers and industry members on multiple platforms.

Cheese Party messaging reached the wide audience envisioned for the campaign, on more platforms than had originally been anticipated—from an “endorsement” by Colorado Governor John Hickenlooper, to imagery in Culture Magazine with a distribution of over 50,000 readers. A craft brewery, Confluence Brewing Company, even collaborated on a “Cheese Party Pale Lager” that reached consumers at restaurants and retail in Des Moines, Iowa in the summer of 2016.