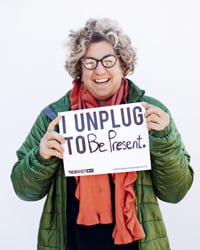 The American Psychiatric Association considers internet addiction an official mental health disorder. That’s why nonprofit Reboot developed the National Day of Unplugging, encouraging all hyper-connected, frequently frantic people to take a tech detox from all things digital. During the NDU, Reboot asked participants to “unplug” by turning off all their gadgets for a full 24 hours beginning at sunset March 1 through sunset March 2 in an effort to bring balance back into their lives and allowing them to spend the time reconnecting with friends, family and community.

This year, the organization also wanted participants to actively pledge participation by filling out an “I Unplug To__” sign and posting a photo with the sign to the NDU website. Reboot enlisted Weber Shandwick for the third consecutive year to continue to help generate broad traditional and social media awareness and to encourage participation for the campaign.

Overall, the campaign was a huge success. Strategic media outreach garnered 602,588,800 impressions—an increase of over 400 million from the previous year—with 269 online and 178 broadcast placements. Some top-tier placements included CBS This Morning, TIME, Real Simple, The Huffington Post, TechCrunch and PCMag. Reboot experienced greater participation than ever before and exceeded its engagement goals with more than 28,000 unique visitors to the NDU website, 5,000 likes on Facebook, and 6,749 individual mentions on Twitter.