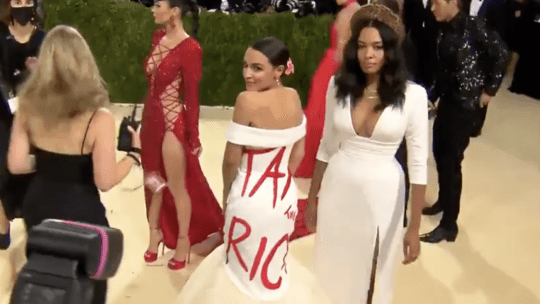 The annual Met Gala routinely attracts the eyes of those with an interest in creativity, celebrity and high fashion. However, this year, Rep. Alexandria Ocasio-Cortez attended her first Met Gala, provoking a true statement. Bright red script saying “TAX THE RICH” stood out across the back of her white gown, generating conversation on both sides of the political spectrum.

Now, as many PR practitioners know, utilizing a very public platform to deliver a message doesn’t happen overnight. Teams of communicators plan and strategize messaging and delivery. In this case BerlinRosen worked with the designer, Brother Vellies’ creative director Aurora James, as well as with Ocasio-Cortez’s PR team.

Janna Pea, EVP, BerlinRosen, worked with James, a Black woman designer who founded the 15 Percent Pledge, during the social justice reckoning during the summer of 2020. The 15 Percent Pledge encourages retailers and corporations, in the fashion and beauty space, to sign an agreement dedicating 15 percent of their buying power to Black-owned businesses. Notable signees include Gap and Sephora.

“My role and our role as the communications support was about helping to uplift and amplify their message and this moment," Pea said. "It is inspiring how this vision came together and our firm was proud to be a part of that process."

Pea noted the importance of preparation and providing a context for reporters to include when delivering the messaging. This included prepping materials that highlighted talking points for the congresswoman and James, as well as offering select reporters nuggets of info without giving everything away.

“The whole point was to make it a surprise, and teeing up the right reporters, so they had the context behind the look,” Pea said. “Because it's one thing to see the dress and say, 'Oh, my goodness, why would you do this?' But to have the context as to WHY they did it—and make sure the press understood, that was our role."

The dress certainly caused a stir, trending on social media. It remains a topic of articles and conversation several days later. Some pundits found the message ironic at a lavish event, while others applauded the bravado of the statement amidst the Met Gala grandeur. Ocasio-Cortez was quick to respond in a Vogue livestream.

"The Met Gala is obviously one of the most exclusive events in the world, and we wanted to come and deliver a message,” James said. “And I think when we talk about inclusion and gaining access to closed rooms for people of color, when you finally get a seat at the table you have to decide what the message is that you want to deliver," James said.

Pea said the message is doing exactly what it was meant to do, attract attention.

“I'm not sure anybody could have fully prepared for what the outcome truly was,” Pea said. "The goal was for people to see it and be inspired. Rep. Ocasio-Cortez is a young woman of color in powerful position to deliver a powerful message on the carpet—a message that got folks to say, 'Oh, wait, what does that mean? And why does she feel like she needs to put that on a dress?' The wealth gap continues to grow and the collaboration between Aurora and the congresswoman addressed that. I’m glad conversations are continuing to be had around this topic."