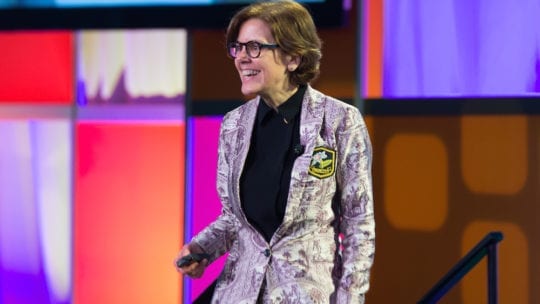 MarketingProfs’ chief content officer Ann Handley could feel the vibe in the ballroom of the Marriott Marquis Atlanta. After 2-and-a-half days of The Social Shake-Up 2019, attendees were primed with great takeaway and networking contacts. They also were feeling the effects of several hellacious parties and receptions.

Clad in a light-brown suit adorned with a delft pottery pattern and matching shoes that prompted many "best dressed" tweets, Handley felt their pain. She mentioned a shaker who earlier asked what time she’d arrived at the show. “It feels like about 14 years ago...event years are like dog years," she quipped.

Those jokes were a good way to lead into Handley's main message, one that she’s written about and spoken of often: with content created so quickly and flying at audiences at breakneck speed, one path to success is to “slow down.”

“There’s too much going on already… audiences are inundated,” Handley said. "You know, we have to post on Instagram every day...even if we have nothing to say, right?" At this point one of Handley's hilarious slides was onscreen. It showed a sign in front of a Pizza Hut. "We Have Pizza," the sign read. Point taken.

Moreover, the pace of content isn’t declining, she said. A study conducted late last year by her company, MarketingProfs, and the Content Marketing Institute shows more than 70 percent of marketers plan to increase their content output in 2019. On the other hand, just 30 percent believe their content strategy is effective.

An issue with brand content, Handley believes, is that too much of it is "corporate-centric" and too little of it provides value to readers. It feels like brands are marketing at you. The goal, she suggested, should be "to produce marketing that doesn't feel like marketing...it should feel like friends talking" to each other..."peer to peer, not brand to target."

For marketing content to work, Handley went on to say, it needs an element of "camaraderie...a word you hardly ever hear in marketing these days." Consumers, she added, have a visceral reaction to brands' content. To connect with consumers, content must build affinity with them. Consumers think: "'Do I trust you?' 'Do I like you?' 'Do I see myself consistently in your content?'"

Handley's suggestion to slow down, a variation on “less is more” that she dubbed “slow-cial media,” is not a call to go slowly for its own sake. Nor is it a pitch to “go really slow” or ditch technology. “That’s not the world we live in…that’s not realistic at all,” she said. Instead, Handley advocates producing fewer pieces of content, but “obsessing” over certain parts of them. Doing so, she argued, will raise quality and deliver results in the long run.

The first part of content to obsess over, she said, is story creation. You want "a refreshingly real story." In addition, communicators should slow down as they tell their stories. Her examples were excellent. She told of the Bronx Zoo's Valentine's Day stunt where people could name a cockroach after a loved one or a "slimy ex." The Zoo has a collection of 10,000 Madagascar Hissing Cockroaches. It's been mounting this stunt since 2011.

By contrast, the El Paso Zoo, much smaller than the massive Bronx Zoo, loved its counterpart's campaign. While El Paso lacks roaches, it's loaded with meerkats. And to meerkats, roaches are tantamount to filet mignon. So El Paso bought roaches to feed its meerkats and started “Quit Bugging Me,” allowing people to name a roach after their ex. The roaches, freeze-dried, no less, were the Valentine's Day meal for its meerkats.

El Paso live streamed the feeding, Handley said. She also reported that 6,000 people, including those from nine countries overseas, joined the fun. One tweeter asked if he could name a roach after his mother-in-law. 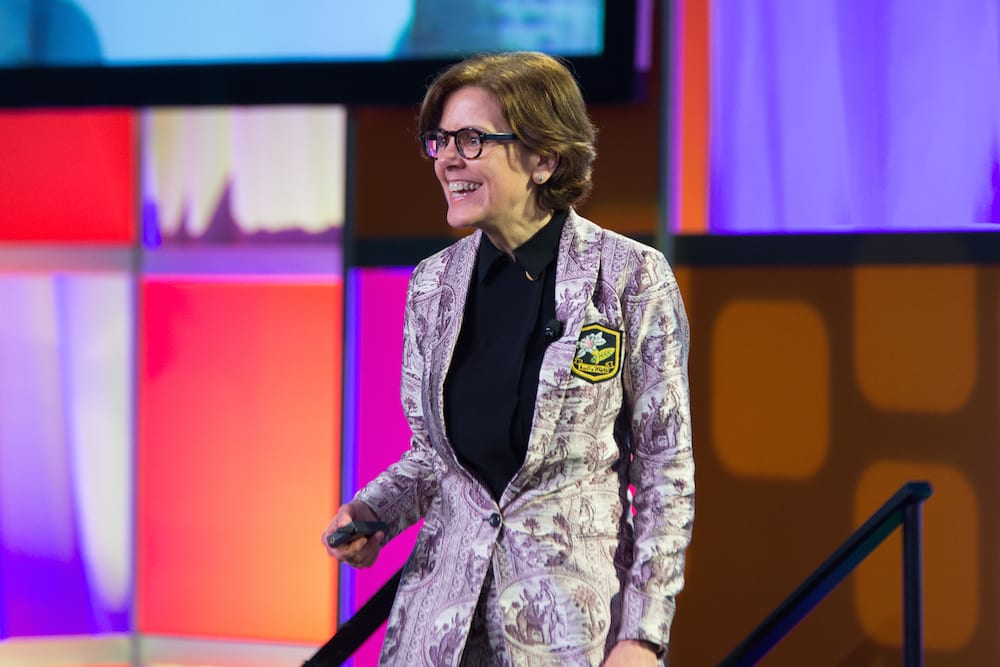 Handley liked that El Paso communicators slowly teased out the story. It used Facebook posts and 11 videos, starting Feb. 4. The effort ended Feb. 18. "The story was strong enough to be told over time...and they were strategic about it," she said. She also appreciated how El Paso "told a human story [about people not enjoying Valentine's Day]...although [through the meerkats], and in a light way."

In the Bronx, the story was over much quicker. Of course, El Paso also put all 6,000 roach names on paper, dropped them in a large tub and let the meerkats defecate on them. And, yes, it showed this on Facebook Live, Handley told the crowd.

Another target for obsession concerns voice. Slow down so you can lose "that marketing voice...make [your content] sound like you," she urged.

A related point is that when writing, Handley said she's "constantly thinking" about "the tell," a term she adopts from poker. The tell in writing is gleaned from elements of the writer's voice. "If someone covers up your byline" they still "should be able to know that you wrote" it..."they should know your voice...I want everything I write to sound like me...on Twitter, Facebook and Instagram, everything."

And a tip for developing your voice: be specific. Instead of writing "'a dog,' write 'a Cocker Spaniel' or give the dog a name," she said.

Handley also urged attendees to use newsletters for marketing, not just as a distribution channel. Slow down and concentrate on the "letter" in newsletter, she advised. She mentioned billionaire investor Warren Buffett, "The Oracle of Omaha" who writes an annual letter to shareholders. The letters are acclaimed for their wisdom, but also for the jokes, lessons and stories Buffett inserts. His secret, Handley said, is that he thinks of his sister Doris while writing. "He literally writes to one subscriber," she said. Not a bad lesson.