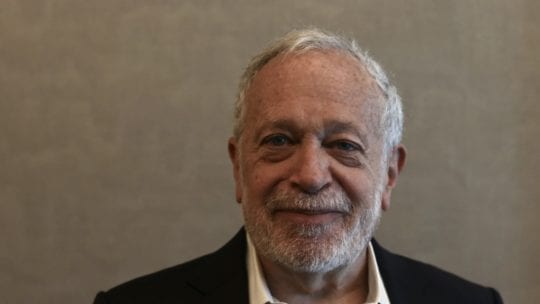 Former Secretary of Labor Robert Reich may at first seem an odd choice of keynoter for at this year's PRSA 2018 International Conference. His vast resume—he counts himself as a revered economist, political commentator and founder of Inequality Media—may not position the man as an opportune speaker to a convention of communicators. A closer look at Reich's many recent writings, however, specifically his 2018 book "The Common Good", contain the deeply mindful perspectives of a man genuinely invested in promoting civil discourse in this country, and who believes PR pros are in a prime position to help facilitate it.

The idea that most Americans have lost the ability to speak civilly to each other in these uncertain times may not be Reich's alone, but he offered an imperative specific to the 2,500+ communicators at the international conference: In an age when people don't know how to talk to each other, or how to listen, it's we communications professionals who must act as the stewards and promoters of civility.

"You are people who set the tone very much for what we, and how we, communicate," Reich began. "And there is now a vitriol, and anger in the system. We are not communicating."

He went on to isolate three main reasons for why incivility has become the main wash-word of communications today, "and you can help in all three domains," he said.

Reich shared a story about his leaving Cambridge, Massachusetts to take up his teaching job in Berkley, California, when he discovered that Berkley and Cambridge were essentially "the same city" because, in terms of tribal geography, everyone had the same attitudes. "We can't learn anything if we don't actually engage with people who have different points of view," he said. "I want to urge you to break out of that constraint."

"Part of disagreeing is listening—eloquent listening," Reich continued. He explained that the framers of the constitution "understood that a democracy works only because people engage in what they called 'democratic deliberation'. That meant that Americans spoke to each other about our disagreements, and we listened to each other, and we kept an open mind with regard to one another."

"There's no easy way to overcome geographic tribalism, but it is vitally important that we reach out, all of us," said Reich. "Communications professionals, you get a vote in that process. You can enable us to not avoid hard conversation. You can encourage us to reach out to people who we disagree with and listen eloquently."

Reich then mentioned the second reason, something he's often written and taught about—stagnant wages. He explained that between WWII and the 1970s, almost everyone's wages grew as the economy grew. But, since the late '70s, the median wage has almost not changed at all. In terms of purchasing power, the median worker is earning the same that they would have 40 years ago, despite the fact that we are in a different economy with different assumptions.

Previous coping mechanisms, such as women joining the workforce in the 1970s and double income families whose parents essentially worked in shifts in the 1990s, no longer provided the economic boost they once did. And when middle class families turned to taking out home loans using their house as collateral, we experienced the 2008 housing bubble, which eventually burst. 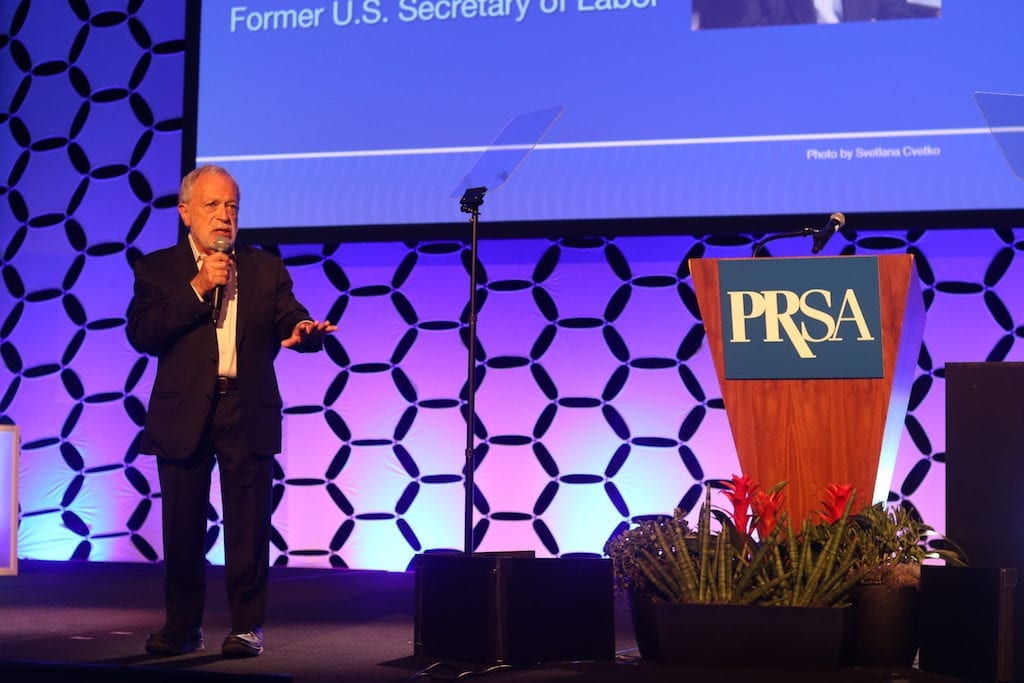 When the big banks got bailed out, and millions of Americans lost their homes, their savings and their jobs, trust was destroyed. "People came to understand they weren't doing any better," said Reich, "...when the banks got bailed out and nobody went to jail, people came to believe that the game was rigged against them. Whatever side of the political divide you were on, people were angry," said Reich.

"And don't believe that the country is not still angry. Yes, it takes a lot of different forms. Yes, a lot of it has to do with diversity and inclusion...But it goes beyond that to the very basics. It goes to, 'This is not my country, somebody else is pulling the strings. Somebody else is in charge. I don't any longer have the respect that I used to have and I don't any longer have confidence in the future.'''

Reich said that only 50 percent of millennials are doing better than their parents, and the American dream that kids will outperform their parents has been erased, adding to anger.

"I don't expect you communications professionals to be able to do anything about the forces that I'm talking about," said Reich, "but I want you to be aware how deep they are. It's not just that we are in our own little bubbles, it's also endemic to where we are economically." Reich pleaded with communicators to consider the depth and longstanding seed of this economic divide in their communications strategies, and adjust them accordingly.

The third reason has to do with the media itself. "There has been a change, and part of that change is a diminution in attention spans," said Reich. He made it very clear that he wasn't criticizing this—young people are visually much more acute than baby boomers, he said, and they gather information much more efficiently, but they also look at different media.

After his discussion, PR News caught up with Reich on his way out and asked him to expand on what communicators could do to better hold their communities responsible when they distort the truth in marketing and communications.

"What the clients of public relations professionals have to understand, and PR professionals can help them understand, is that the corrosion of trust is the end of the game. That is, it's almost impossible to get it back. Look at Wells Fargo, or look at Facebook. If these institutions start to lose trust because they're not truthful or they don't let all the negatives out, then the future executives of these institutions are faced with an uphill fight."