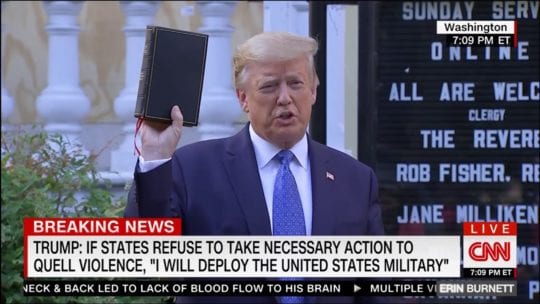 Even after nearly four years of presidential tweets, should you doubt the significance of social media just look at the story of Gen. Mark Milley. In particular, the recent reporting about Milley from NBC’s national security correspondent Courtney Kube and correspondent Carol E. Lee.

Milley’s been in the news lately. He appeared with the president's entourage during a now-controversial stroll the chief executive took June 1. After a speech in the White House Rose Garden, the president and several cabinet officials, including Defense Secretary Mark Esper, walked through Lafayette Park to the threshold of historic St John’s Episcopal Church, the church of the presidents.

National Guard troops used rubber bullets and tear gas to clear protesters and one clergy from an area around the church. The area cleared, the president participated in a photo op in front of the church.

Aside from the reaction to the photo op (a story for another day), Milley’s presence in the president’s all-white group angered critics. The military is intended to protect the republic. Instead, Milley's presence symbolized something else–the threat of troops facing off against US citizens protesting in the streets.

Critics also blasted Milley’s attire. Rushing from the Pentagon to the White House unexpectedly, Milley wore fighting fatigues, as opposed to a dress uniform. For critics, the symbolism was crystal clear.

Kube and Lee reported that Milley argued against using active-duty troops on US streets. In addition, as any military member would, he understood the symbolism of his being present during an ostensibly partisan political activity.

Here’s where social media enters the story. Milley, according to Kube and Lee’s triple-sourced reporting, made like a PR pro. The general spent hours that night monitoring the social conversation. He read social media, absorbing critics attacking him, three defense officials told the NBC reporters.

Milley "stayed up much of the night reading social media,” Kube and Lee wrote. “He also reached out to confidants, asking them for advice and discussing whether he should resign, the officials said.”

After that tumultuous evening, Milley apparently spent 10 gut-wrenching days considering his options. That culminated in an apology yesterday, via a recorded video address to the graduating class at National Defense University in Washington, D.C.

From a PR viewpoint, Milley’s apology was useful, though slightly lacking. It is direct, uses clear language and is in the first person. "I should not have been there. My presence in that moment, and in that environment, created a perception of the military involved in domestic politics." In addition, he said, “It was a mistake that I’ve learned from.”

Moreover, the general recognized his momentary lack of situation awareness, something needed in crisis and combat, says Jon Goldberg, founder/CEO of Reputation Architects.

A more effective apology would have included the words “I apologize.” In addition, several PR pros believe Milley also could have apologized for wearing fatigues and the violence that preceded the photo op.

“He apologizes for his presence—merely for showing up—but not for his decision to don combat fatigues, which was itself a political statement,” Goldberg says. Milley also failed to mention “the violence against peaceful protesters…to clear the way for the president and his entourage."

For Mike Cherenson, EVP at SCG, the apology “was necessary, and seemed to be heartfelt." Like Goldberg, Cherenson believes Milley was “blind, when it mattered most, to the power of imagery. All leaders should heed his mistake.”