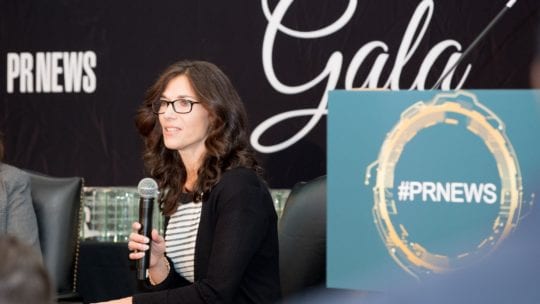 There’s often a moment or two during PRNEWS awards celebrations where emotion rises to the surface; it's one of the times that you don't forget. That moment occurred early during the PRNEWS Best Places to Work and Agency Elite awards Thurs., Nov. 21, at the Yale Club in New York City.

Deirdre Breakenridge, CEO of Pure Performance Communications, explained during her keynote why she’d begun a massive research project about empathy and intergenerational connections. Her stepdaughter Noelle, a millennial, was a caring woman concerned with the environment and sustainability. A vegan and autism volunteer, Noelle "chose to end her journey last September.” But why?

"All I wanted to do" after Noelle's passing, Breakenridge said, “was talk to millennials.” Breakenridge wondered if her 24-year-old stepdaughter sent signs she and everyone else missed.  The 30-year PR pro, author and professor began a year-long exploration of how millennials communicate. She also studied what they consider important in relationships in and out of the workplace.

A Lot to Say

“I thought my conversations with millennials would be brief…but some lasted 90 minutes or an hour…they had a lot to say.” Some of it wasn’t positive. Senior business leaders, they told her, were not connecting with millennials. "‘They don’t get how to connect with us,’" they told her.

True, some leaders are “sharing a lot,” on social media, in thought leadership articles and town halls, but the connection isn’t deep. Leaders’ messages lack authenticity; they seem manufactured, millennial participants told Breakenridge. "Disingenuous" was a descriptor she heard often during her research. It’s as “'if lawyers or PR professionals crafted [the messages],'” they told her. Though the millennials didn’t say so aloud, the implication, Breakenridge said, was, "‘We’re not stupid.’"

After her year-long immersion, Breakenridge crafted a 12-part model she believes helps build “genuine” relationships and communication between leaders and millennials, online and in person. Her FEEL model asks leaders to Face their fears, connect through Empathy, learn Ethics and use good judgment and unleash the Love of your mission. As such, it was a fitting topic as PRNEWS saluted the Top Places to Work.

It's Not Easy to FEEL

FEEL is “a process…it takes work and courage,” she said. Just going in and saying, "'I'll be more attentive and will listen actively,'" won’t do it, she said. Leaders need to “face their fears…engage with empathy…[and] unleash their passion.”

In addition, FEEL “is an exercise in consistency.” For example, it won't work well if leaders engage with empathy sporadically, in some forums and not others. Trust needs to be earned. The method begins with an audit and ends with measurement.

Based on FEEL, Breakenridge offered steps leaders can take to improve their communication with millennials.